How a century of movies—from a 1905 French silent flick to 2004's The Passion of The Christ—have encouraged us to look at Jesus … and at the world through his eyes.
by Peter T. Chattaway|February 4, 2005

The following article, written by one of our critics, Peter T. Chattaway, is a chapter from the new book Re-Viewing the Passion (Palgrave Macmillan). With the one-year anniversary approaching for the release date of The Passion of The Christ (Feb. 25, 2004), we thought this was a good time to run this retrospective. 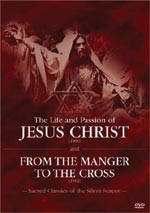 In orthodox Christian belief, Jesus is both God and man, fully divine and fully human. And it is because God has revealed himself in the form of a particular person who lived in a particular time and a particular place that Christians down through the ages have generally felt free to portray Jesus in icons, passion plays, and other forms of religious art. But except for the most basic and theologically essential points, such works of art generally pass over the particularities of Jesus's life. His humanity, expressed in the mere fact that he can be depicted at all, is often balanced with his divinity by a degree of artistic abstraction: Whether depicting Christ in static paintings or following the stations of the cross according to a set pattern, artists have tended to downplay realistic or naturalistic details to focus on the more eternal truths.

Film, therefore, poses a special challenge for the artist who would dramatize the life of Christ. Traditionally, movies about Jesus have respected his divinity by keeping him at a distance; he has typically been portrayed in objective terms that keep him mystical and otherworldly. But in recent years filmmakers eager to explore the humanity of Jesus have tended to portray him in more subjective terms, through the use of voice-overs, dreams, and other techniques that draw us into the minds of a film's characters; however, in doing so, they have often demystified Jesus so thoroughly that he seems to lose his divine authority. The Passion of The Christ presents a striking balance between these two approaches. Through its frequent use of flashbacks and point-of-view shots, the film gives the audience the sense that it is experiencing Jesus's thoughts and memories from his own subjective perspective, yet the memories themselves often are portrayed in an objective, iconic fashion that preserves the film's more mystical inclinations.

The basic element of a film is the shot. The word "movie" is short for "moving picture," so film itself can be said to have a dual nature of sorts: The filmmaker arranges people and objects within a specific visual space (the shot, or "picture") and then strings these shots together in a linear fashion over a specific length of time (the "motion"). Both the composition of the shots and the way the images are paced and edited together convey some sort of meaning to the viewer. The earliest filmmakers, however, did not grasp the key dimension of editing at first. For them, the basic element was not the edited series of shots but the scene, and their films were little more than wordless plays set in front of a static camera. 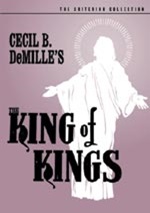 A typical early example of this is The Life and Passion of Jesus Christ (1905), produced by the Pathé company in France. Nearly every shot is a simple tableau in which the camera stands still and observes the entire stage, as it were, while the actors move about within the frame. The few exceptions to this format stand out precisely because they are so rare. When Pilate presents Jesus to the crowd, the film cuts to a medium shot of Jesus accompanied by the words ecce homo (Latin: "behold the man"). Later the film cuts to a medium shot of St. Veronica holding a cloth with the image of Jesus's face, which she offers to one side of the screen, then the other, and then up in the direction of heaven. Again, we as film viewers are invited to behold the man. In all of this, the Pathé film's treatment of Jesus and the other characters remains fairly objective—the camera sits and observes the characters, and it specifically encourages us to gaze on Christ but not to identify with him, as such.

Hints of subjectivity begin to crop up in From the Manger to the Cross (1912), the first feature-length film about Jesus, produced by the Kalem company and filmed in the Middle East. The shots remain fairly simple and static, but director Sidney Olcott makes greater use of depth, sometimes putting the camera behind characters' backs so that we can see what they are looking at. For example, in one early shot, Joseph stands in the foreground and mulls over what to do, now that he has learned Mary is pregnant, while Mary passes by in the distance. Joseph turns as he paces and pauses—and as he looks at her, so do we. Similarly, the camera is positioned behind John the Baptist when he addresses his followers, sees Jesus far off in the distance, and points him out. On both occasions we are invited to identify with a person who is looking on someone who embodies a divine or mysterious quality.

However, the camera is also positioned behind Jesus's back as he regards his disciples sleeping in Gethsemane. The Gethsemane episode, in which Jesus asks God to take the cup of suffering away from him, is one of a handful from the Gospels in which Jesus expresses emotions and desires that lend themselves to a more human and subjective interpretation. Thus, on this occasion at least, the film invites viewers to identify with Jesus as he anticipates his arrest.

The filmmaker most often credited with first realizing the unique power of film—its ability to combine different sorts of shots from different perspectives and to pace these images in a way that involves the audience in the lives of the characters—is D. W. Griffith, whose Civil War epic, The Birth of a Nation (1915), advanced the art form but also generated controversy for its positive portrayal of the Ku Klux Klan. Griffith responded to those criticisms with another film, Intolerance (1916), which cuts back and forth among four stories set in four different eras, to show how intolerance has plagued the world down through the ages. One of these stories concerns the life and death of Christ, and one of the striking things about Griffith's treatment is that, in contrast to the more subjective mix of shots and rhythms that he uses in the other stories, he stands back and regards Jesus with an otherworldly objectivity. In contrast to the other story lines, the camera never comes very close to Christ; in fact, it seems to move farther and farther away from him, until the crucifixion is so far off that we can barely make it out.

In sharp contrast to Griffith's reticence, Cecil B. DeMille made bold use of a point-of-view shot to introduce audiences to his Jesus in The King of Kings (1927), the last of the silent biblical epics. For the first 15 minutes or so, we do not see Jesus at all; instead, we see characters talk about him, until finally a blind girl approaches him—at this point, Jesus is still offscreen—and asks to be healed. A title card declares: "I am come a light into the world—that whosoever believeth in me shall not abide in darkness." Then we are introduced to Jesus, his face briefly framed by a halo, in a tight close-up that fades into view as the girl gains her sight.

But while DeMille brings his camera much closer to Jesus, he remains fairly objective in his treatment of the character. Jesus is someone to look at, not someone with whom we are to identify, and his gaze does not reveal anything about his character as much as it is intended to effect a change in the lives of other characters. Shortly after Jesus heals the blind girl, Mary Magdalene arrives, haughty and proud, but something about the way Jesus looks at her makes her uncomfortable, until finally he casts the seven deadly sins out of her.