Hollywood's black movies often depict negative stereotypes—gangs, violence—or revel in buffoonery, a la White Chicks and Soul Plane. But Michael and Christine Swanson are trying to change that, one film at a time.
by Mark Moring|February 8, 2005

Michael and Christine Swanson are African-American filmmakers, Christians, and owners of Faith Filmworks, an independent motion picture production company which, according to their website, is "dedicated to making memorable and relevant stories with emotional and moral resonance." Their first major film, All About You, is a romantic comedy that won several awards at black film festivals. In recognition of Black History Month, we chatted with the Swansons about their work, about black movies—good and bad—and how those films fit into our culture, and about what they're working on next.

What did you think of the Oscar nominations? African-Americans received five of the 20 acting nominations, the most ever.

Michael: A lot of good nominations. I was really happy to see Don Cheadle nominated for his performance in Hotel Rwanda, one of my favorite movies from last year.

Christine: But sad to say, I don't think he's going to win because it's a popularity contest. That film is just too hard-hitting for a lot of people to go see in the masses.

They say Jamie Foxx is the favorite to win Best Actor. Do you think Cheadle's performance was better?

Michael: Better in a different way. I think he had to go deeper into the role. If I had to vote between the two, I would vote for Don Cheadle. Not to take anything away from Jamie's performance, because that was really topnotch too. He really got into the character and he took that role seriously. But there's just something about Don Cheadle's performance that really took his performance to another level. 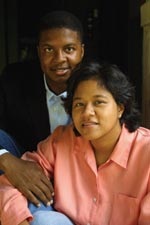