As a 30-something never-married woman, I feel for Kat Ellis. I know well the fear and loathing that can result from finding a cream-colored, embossed envelope in the mail inviting you "and guest" to an upcoming wedding ceremony. It's the and guest part that inspires the most panic if you aren't currently dating someone. It's like an invitation to come parade around the fact that not only is it Not You getting married, but that you couldn't even find someone to accompany you to watch someone else walk the aisle.

In some ways I feel even more for Kat (Debra Messing). This isn't just any wedding, it's her half-sister's wedding. Her younger, self-absorbed half-sister. And to add insult to injury, the best man is Kat's ex-fiancé. The one she was with for seven years . . . until he unceremoniously dumped her. Ouch.

But in some ways I also feel less for Kat. I mean, have you seen her? This woman needs to hire an escort—as in, you know, a male prostitute? Surely she has a guy pal, men beating down her door to date her, or at the very least a gay male best friend to accompany her?

Unfortunately, the question of "why an escort?" is never really answered. I would have liked to see this neurotic woman deliberating such a brazen move, but instead the movie starts with her handing a plane ticket to a courier to deliver to her weekend arm candy (the wedding's in London, they're meeting at the airport). The closest to deliberation we see is Kat hanging onto the envelope containing the plane ticket even after the courier has grasped the other end. After a brief tug-of-war, he says, "You're going to have to let go." To which she sheepishly replies, "You're going to have to help me."

Savvy moviegoers will recognize that the major ... 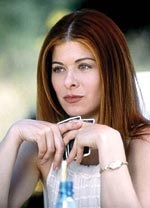