In one scene of 1976's The Bad News Bears, two members of the hated Yankees pick on a nerdy Bears player by filling his hat with ketchup. In the new remake, two members of the Yankees lock the boy into a porta-potty and tip it back and forth to each other.

This comparison of scenes pretty much sums up the execution of this remake about a drunk former major leaguer, Morris Buttermaker (Billy Bob Thornton), who coaches a ragtag group of misfit little leaguers. Changes in a remake are fine, but the problem is that even though the new Bad News Bears faithfully follows the original almost scene-for-scene, it makes little pointless tweaks apparently only there to distinguish it from the '76 flick. For instance, the porta-potty scene comes at the same point as in the old film, in an almost identical setting, and with very similar dialogue and outcome. So why the change? Who knows: The new scene isn't funnier, more modern, more effective, or more fitting. Like most of the movie's tweaks, this change is a side step at best. In fact, most of the funny jokes or interesting story points come from the original. 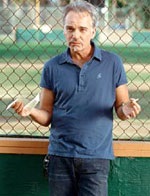 And unfortunately, like the example above, most of the changes are in the toilet. There's now a player in a wheelchair so the movie can make "cripple" jokes. A father character becomes a single mom for Buttermaker to sleep with. Buttermaker is an exterminator instead of a pool man to provide gross dead animal jokes. And the Bears' sponsor is no longer the very funny Chico's Bail Bonds, but is instead a strip club—which means stripper characters can now appear at games.

Of course, the original Bad News Bears weren't saints. Buttermaker (Walter Matthau) was constantly drinking—and even handed out beer to kids as a celebration. The kids also swore, fought and used racial epithets. The movie was crude and politically incorrect. But the new version cranks it all up to eleven. There's more fat jokes, more mean put-downs, more racial jokes, more swearing, and—unlike the original—lots of sexual jokes, objectifying of women, and cleavage. The bottom line is the new Bad News Bears takes the joke way too far. It's just not funny at all. 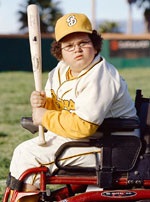 Troy Gentile, as a player in a wheelchair, sets the stage for a slew of 'cripple' jokes

But the differences from the original aren't the remake's only faults. First of all, the acting is bad. The cast has its moments—Greg Kinnear (As Good As It Gets) succeeds as the winning-is-everything rival coach—but for the most part, everyone is either incompetent or doesn't seem to care. Thornton seems to be phoning it in. Worst of all, the movie's child actors can't even make bobbling a groundball look realistic. Everything most of the young actors do feels very forced, staged and contrived.

Second, the film isn't the least bit innovative. The entire thing is formulaic and by-the-book. I don't really even need to do a story synopsis. You know that the team starts off bad, recruits better players, starts to get their act together, and ends up in the championship game. Of course, the original was really the prototype of the kid sports movie and one of the first ragtag-to-competitors films, but now it's old hat. And this largely predictable movie does hardly anything to try and stand out—except to perhaps exhibit the genre's most references to male anatomy. 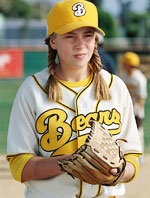 Sammi Kane Kraft plays Amanda, who is recruited to save the team

Third, the script lacks much heart or good storytelling. You really don't get to know the players on the team. Except for the pretty funny Tanner (Timmy Deters) and Amanda, the girl (Sammi Kraft) recruited to save the team, most of the team's original players blend into one another. You don't care enough to emphasize with the players' joys or struggles. This flaw is worsened by very uneven storytelling. Because of choppy pacing and awkward editing, the movie seems to just jump around like a strung-together series of scenes. It's hard to really get into the film when scenes don't flow well into each other and feel cut short.

A staple of the sports film is seeing a team learning what it means to be a team, coming of age, and understanding that there are things more important than winning. And, of course, those moments are in Bad News Bears. The team does come together and Buttermaker does learn what it means to be a good coach. In fact, there's also an underlying theme about the importance of a strong, invested father figure as Buttermaker sorts out his relationship with young pitcher Amanda. However, what hurts the film is that in addition to all the swearing, disrespect, sexuality and offensiveness, the film's themes actually champion bad morals. The players aren't ever disciplined for bad behavior; most adults are shown to be morons, and the movie actually ends with the charming theme that it's best to lie to your parents.

Buttermaker (Thorton) goes off on a player, with plenty of bleeps

When it is all said and done, there's really no reason whatsoever for a Christian to see this movie. There are plenty of family-focused sports movies with almost identical ragtag team plots, such as The Mighty Ducks films. In fact, there's even a cleaner, better made, and far funnier sports movie in theaters right now— Kicking and Screaming. And if you do want the darker side of this genre—and are comfortable with swearing and political incorrectness—you'd be better off seeing the more effective, better acted, and more charming original.

It's sad that Hollywood is so infatuated with comedies revolving around sex, taboo words and cruelty. But it's even more sad when that infatuation includes throwing kids into the mix like this or in Thornton's other morally corrupt comedy, Bad Santa (2003). I'm not sure why filmmakers think we want to see kids put into dark situations and berated with profanities by Billy Bob Thornton. These movies must make money. But hopefully, enough people will stay away from this movie to deliver Hollywood the message that this kind of film won't hit a homerun.

Bad News Bears is rated PG-13 for rude behavior, language throughout, some sexuality and thematic elements, but should be approached as if it were rated R. There's every kind of bad news in the film. No child or young teenager should see it. The swearing is nearly constant and uses the full gamut of words and hand gestures. There are at least two uses of Jesus' name in vain. There is a lot of sexual talk and there's major cleavage, sexy dances by clothed strippers and one reference to a one-night stand. Buttermaker drinks throughout the movie and gives kids non-alcoholic beer. Off-color jokes insult everyone—overweight people, homosexuals, various ethnicities, etc. The kids are also very violent, rude and cruel to each other.

Billy Bob Thornton—who made a famous mean-spirited fool of himself in Bad Santa—plays another Grade-A jerk in an unnecessary remake of Bad News Bears, a comedy about rude, crude kids who cuss, drink beer, and cause a ruckus on the baseball field.

The only real surprise in this picture is its director—Richard Linklater, who seems to be developing a split personality: He can be a cheap crowd-pleaser and a sophisticated artist. He's given us critically acclaimed films like Before Sunset, Waking Life, and Slacker, but he's also responsible for the whimsical box office smash School of Rock, and now this: a movie about kids that is highly inappropriate viewing for kids.

David DiCerto (Catholic News Service) says that the film "strikes out as recommendable family fare." But he adds, "Bears is not all bad news. Both versions ultimately impart a positive message that promotes self-esteem and criticizes winning-at-all-costs competitiveness, while exploring themes of redemption … and reconciliation."

"This unnecessary remake should have been called Badder News Bears," says Christopher Lyon (Plugged In). "Its only real additions to the 30-year-old original come in added sexual content, more profanity, and what feels like a lot of running time."

Jeffrey Huston (Crosswalk) says, "In the mid-1970s The Bad News Bears didn't just launch a franchise; it crossed content barriers deemed taboo for a family film. Like its predecessor, the new Bad News Bears crosses those lines with great frequency. Unfortunately, the lines today start at a much lower level than they did 30 years ago."

Cliff Vaughn (Ethics Daily) says, "Paramount calls its remake 'hilarious.' Not so. The movie … plods on unevenly. At almost two hours, it's much too long. Some of the lines land; some don't. Some situations are funny; some are just annoying."

Mainstream critics aren't too happy with it either. But hey, it has a higher approval rating than The Island!

1 of 4
Billy Bob Thorton is bad news as Morris ButtermakerTroy Gentile, as a player in a wheelchair, sets the stage for a slew of 'cripple' jokesSammi Kane Kraft plays Amanda, who is recruited to save the teamButtermaker (Thorton) goes off on a player, with plenty of bleeps