If you see Dark Water expecting a fright show, you may be disappointed. True, the film is a remake of a Japanese thriller directed by Hideo Nakata, and it is based on a novel by Koji Suzuki, both of whom were responsible for Ringu, the horror film that was remade in English as The Ring. And true, the film is about a ghost that haunts an apartment building and tends to express itself in dark puddles and splotchy stains on the ceiling. But the original film was more of a brooding psychological drama than a horror movie, per se, and the remake—directed by Brazilian auteur Walter Salles (Central Station, The Motorcycle Diaries) from a script by Rafael Yglesias (Fearless)—stays true to that vision.

The film begins in Seattle over 30 years ago. Young Dahlia (Perla Haney-Jardine) is standing outside her school, waiting for her mother (Hal Hartley veteran Elina Löwensohn) to come pick her up, long after all the other children have gone home; and when her mother does arrive, you can tell that she resents her child and regards her as a burden, at best. The film then jumps ahead to present-day New York. The grown-up Dahlia (Jennifer Connelly) is in the middle of a messy divorce from her husband Kyle (Dougray Scott), and she is looking for a place to live with their five-year-old daughter Cecilia (Ariel Gade), or "Ceci".

One of the cheaper buildings she checks out is an old and somewhat run-down apartment complex on Roosevelt Island that happens to be only two blocks away from one of the best schools in the city. Ceci doesn't like the dingy look of the place at first—when Dahlia optimistically compares the neighborhood's dense, claustrophobic architecture to a small town, Ceci demurs, "I like the big city better"—but by the end of their visit, Ceci suddenly can't wait to live there. Does she change her mind because of the rather unconvincing sales pitch given by the property manager (John C. Reilly)? Hardly. Instead, her attachment to the place seems to have something to do with a Hello Kitty bag she finds on the roof of the building, after she parts from her mother and checks out one of the stairwells.

We suspect right away that there is something more to Ceci's interest in the place than the bag—which is entrusted to the superintendent (Pete Postlethwaite), himself a seemingly shifty character, just in case someone claims it. By this point, Dahlia has already felt a ghostly hand reaching for her own in the elevator, though she shrugs it off; and the water stains everywhere, especially in the ceiling above Ceci's bed, seem more than accidental. Before long, Ceci is looking at the stain above her bed—or at the hole in the ceiling the superintendent leaves there during one of his half-hearted attempts to fix the leak—and talking to an "imaginary friend" who seems to be speaking to her from that space.

Naturally, all this strange behavior places an enormous amount of stress on Dahlia as she fights her ex-husband for custody of their daughter. But Dahlia, too, begins to see and hear strange things. A visit to the abandoned, flooded apartment upstairs brings back shocking memories of her own abusive mother; and Dahlia begins to sense that she and Ceci's "imaginary friend", whose name is Natasha, have something in common—an impression deepened by the fact that Natasha, like young Dahlia, is also played by Haney-Jardine. 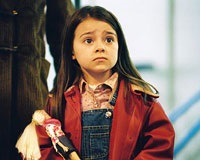 Unfortunately, the film is not as clear on this point as it could have been. The original film was more explicit in spelling out the role that parental neglect played in making Natasha the apparition that she now is, and it was more explicit in showing how this shared history of parental neglect creates a sort of connection between her and Dahlia, who comes to feel she can heal her own psychological wounds by helping this ghost to deal with hers. These points are still evident in the remake, but they are muted somewhat; it is as though Yglesias and Salles wanted to be more suggestive and evocative than the typical scary movie—and that is a worthwhile aim in its own right—but they pulled one too many punches. At the same time, they sensationalize things a bit more: Certain parents here are not merely neglectful, but abusive or even insane, presumably because the filmmakers felt it would take more than not being picked up from school on time to traumatize an American child.

There's no telling what one might find in these dark waters

The entire cast, including Tim Roth as a genial lawyer and Camryn Manheim as Ceci's concerned teacher, turns in fine work. Composer Angelo Badalamenti, a veteran of David Lynch films, turns in a moving score. And cinematographer Affonso Beato finds startling visuals in some of the most drab and humdrum of environments. (Check out the tram ride to Roosevelt Island or the rattling laundry machines in Dahlia's apartment building.) But the film doesn't quite wrap things up in a satisfying way; while the pipes are clean and the faucet runs quite smoothly, it ultimately feels like water down the drain.

Oscar winner Jennifer Connelly (A Beautiful Mind), playing a troubled single mother named Dahlia, guides us through a nerve-wracking remake of a Japanese horror flick, Dark Water. Directed by Walter Salles, who brought us 2004's powerful The Motorcycle Diaries, the film also features talented actors like John C. Reilly and Tim Roth. It follows the nightmarish experience of Dahlia and her daughter as they find out their new home is full of spooky surprises. What results is a troubling exploration of parental neglect and its consequences.

David DiCerto (Catholic News Service) calls it "a stylish and smartly crafted psychological thriller that is both sophisticated and suspenseful." He explains that the film is really about "a mother-daughter relationship. It also explores themes of isolation, abandonment and parental anxiety. The film's symbolic use of water should resonate with Christians; only here it is not a sacramental signifier of grace and cleansing, but—black and ominous—a metaphor for madness, sin and despair."

Caroline Mooney (Christian Spotlight) says, "I loved it—not just the story, but the actual mechanics of the film, the way it was made. The film drew me in. … I enjoyed it thoroughly. But when I sit back and think about the content as a professing Christian, I do have some problems with the language, the use of drugs, and the overall idea of life after death … at least as a ghost."

Eric Rice (Crosswalk) says it's "a well-made movie. It is more suspenseful than horrific, with no gore, or blood, but lots of chilling, 'Don't open that door!' moments.Since it is a ghost movie, there are ghosts, but there is nothing satanic or ritualistic about it. … To the filmmaker's credit, there is a powerful theme that is reinforced several times … abandonment of a child, divorce, and the long-term effects it has on an adult. Jennifer Connelly … does a masterful job as the troubled mom trying to hold a difficult situation together."

Adam R. Holz and Jamie Maxfield (Plugged In) write, "In the end, the spiritual perspective of Dark Water majors on communicating with the dead while wholly excluding any mention (except profane ones) of a God who's greater than life and death. And that's reason enough to exclude this film from your summer viewing list.

Mainstream critics can't find a consensus—it's sufficiently spooky for some, but not for others.

Andrew Coffin (World) says, "The unknown is much more frightening than the known, and some ambiguity in the conclusion would have extended Dark Water's claim on both class and the more provocative themes it explores. But those not inherently uncomfortable with a ghost story may enjoy the elements a skilled filmmaker can bring to a tired, often repulsive genre."

1 of 4
Jennifer Connelly plays the role of Dahlia WilliamsDahlia meets a creepy building superintendent, played by Pete PostlethwaiteAriel Gade plays the part of CeciThere's no telling what one might find in these dark waters