Editor's note: We asked Dave Zimmerman, author of Comic Book Character: Unleashing the Hero in Us All (InterVarsity), to write an essay comparing the Fantastic Four to the modern family. Turns out that today's families have much in common with this fabulous foursome—warts and all. We bicker, we reconcile, we love—and we all face our own villains, the things which threaten to destroy any family. But we, like these superheroes, band together for the battle, using whatever powers we have—super or otherwise—in our quest for victory.

The Fantastic Four are the First Family of superheroes. Oh, there have been other families, before and since this one debuted—from the Marvels to the Incredibles. And technically, the Fantastic Four are a team, not a family, since only two of the four are blood-related. Nevertheless, FF fans regard them as family first, teammates second.

As a family, the Fantastic Four—brought to us by Marvel Comics—changed how superhero stories were told. Before them, superheroes were chums at best, trading quips and high fives as they bludgeoned bad guys. Actual blood relationships were effectively cosmetic. But the first battle the Fantastic Four faced was against one another, and the hostility and tension that occasionally flares up among them has trickled down to the rest of the superhero universe, resulting in more fully realized characters and ultimately richer storytelling. The most interesting battles, after all, are those we fight against the ones we love. 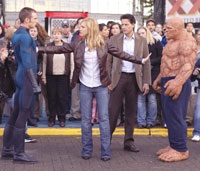 And that's the deal: The Fantastic Four do love each other, even though at times they hate one another. More than 40 years since their debut, they're still treating readers to family tales that are cosmic in scope but still manage to hit close to home. No matter how many aliens they fight, no matter how super-human they've become, they show us again and again that they are simply human.

In a sense, then, Superman and Batman and Spider-Man and all of us who read the comics owe the Fantastic Four a debt of gratitude for their humanity. And despite the larger-than-life spectacle that the new film will bring to the screen this week, their humanity more than anything else is what makes them fantastic.

First things first: Before our heroes were fantastic, they were four. Nothing made them particularly special apart from their collective sense of adventure and their collective sense of community. Truth be told, that's quite enough to make four people particularly special. It's one thing to be motivated by a sense of adventure; it's quite another to be committed to sharing your adventures with other people.

The beginnings of the Fantastic Four, as told in the original canon, trace back to the Cold War space race, at a time when no human beings had yet left the earth. Two of our heroes, Ben Grimm and Reed Richards, were trained to advance the American space program—Ben as a pilot, Reed as a scientist. But when the time came to fly into space, they were joined by their good friends Sue Storm and her brother Johnny, neither of whom had any formal training to prepare them for such a mission.

Unfortunately, their ship was not properly protected from radiation, and as soon as they entered orbit they were overwhelmed by cosmic rays, forcing a return and a crash landing. Their exposure to radiation brought startling changes: Reed developed an elasticity that allowed him to stretch his body to amazing lengths. Sue, his one true love, could become invisible and cast an invisible shield around her and those nearby. Her brother Johnny combusted at will without doing any damage to his body; he could even use fire as a weapon. 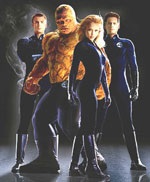 Johnny, Ben, Sue and Reed are a functional 'family'

And then there's the sad case of Ben Grimm, whose body, as a result of the accident, is hardened into orange rock. Though he also developed invulnerability and superhuman strength, he was left permanently and horribly disfigured. While the others took heroic names like the Human Torch, the Invisible Woman and Mr. Fantastic, Ben identified himself simply as the less-than-human Thing.

Dysfunctional family? Look no further than the FF.

In a 1981 comic, Ben lashes out at Johnny after being on the receiving end of a particularly thoughtless practical joke. Interestingly enough, the fight plays out in front of a priest—an awkward witness to the sacred dysfunction of family life. Reed breaks up the fight, and Ben leaves quickly to sulk. The others reflect on what's happened:

REED: "Poor Ben. He plays the clown so much even I sometimes forget it's only a mask to hide the bitterness he still feels …"
JOHNNY: " 'Poor Ben?' Hey, listen Reed, I got as much sympathy for the Thing as anybody, but sometimes he just goes too far. I mean …"
SUE: "Jonathan Storm! You ought to be ashamed of yourself!"
JOHNNY: "Hey, Sis, ease off, will ya? I only meant …"
SUE: "I'm not interested in what you meant—and don't you 'ease off' me! The very idea! Brawling in the middle of our home like a common thug! And in front of a priest!"
REED: "Oh—good morning, Father. We seem to have—ah—forgotten you!"

And there we have an often-repeated insight into the family dynamics of the Fantastic Four: Ben's tragedy is everyone's tragedy, a key ingredient in the divine comedy being played out. Between missions, Reed spends most of his time trying to come up with a way of reversing Ben's disfiguration. Sue is never more maternal than when she empathizes with Ben's sadness. Ben's soliloquies are historically built around his private efforts to find meaning in his suffering or to lament his condition. Johnny, less mature than the rest and "hot-headed" as they come, exploits Ben's poor self-image for his own amusement. 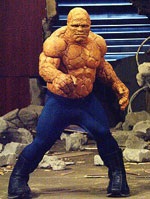 Things are looking Grimm for Ben, perpetually perplexed about his condition

This in itself is a great leap forward in comic book storytelling. Before Ben Grimm, no superhero regretted being a superhero. None thought of himself as less than human or expressed resentment toward the source of his powers. Not surprisingly, Ben became the centerpiece of the team, with his own catch phrase ("It's clobberin' time!") and his own series down through the years. Wallowing in sadness will short-circuit a story in no time, but undergirding a character with sadness will keep readers coming back month after month—a formula that the team's corporate creators repeated with great success (and much imitation from their competitors) in the years to come.

What makes this storytelling innovation work is its believability. Someone whose body was disfigured would quite likely feel self-conscious, resentful, dehumanized. And when tragedy strikes a family, it quite naturally impacts each member. We don't have to read about it in the funny papers; we can see it in our own homes. Mom loses her job and can't find another one: Dad tries to console her, the kids step lightly around her, her brothers and sisters give her unwanted advice, and occasionally she lashes out. The circumstances vary from family to family, but the dynamics are universal.

But as ever-present as the little and big tragedies that plague each family are, they never quite define the family. There is still a life to be lived, and only so much time to indulge the self-pity that attends to tragedy. In the case of the Fantastic Four, as in the case of us all, there is a cosmic calling to be fulfilled.

As the First Family of the superhero universe, the Fantastic Four found plenty of adventures to keep them occupied. X-Men, Daredevil, the Hulk and Spider-Man would come later, but in the beginning the heroic task fell to the FF.

As a result, no other super-group has fought on quite the same level as the Fantastic Four. As the legend goes, their greatest nemesis was introduced with the editorial instruction, "Have them fight God." Thus was born Galactus, the Devourer of Worlds who from the beginning of time has regularly absorbed a planet's worth of energy simply to survive. It was the Fantastic Four who confronted him, who sent him away from the earth, who played the Good Samaritans when he was near death, who proved before an intergalactic court that this being who had destroyed countless species served a higher purpose for the universe.

Such an experience binds people together, to the point that even voluntary associations seem to be ordained. Remember that Ben Grimm isn't related to any of his teammates; he is no closer to Reed and Sue Richards or Johnny Storm than you or I are to our next-door neighbors or our coworkers or the people in our pew. Yet to imagine the Fantastic Four without Ben is uncomfortable; indeed only calamity has broken up this team over time, and time has always brought them back together. Their destinies will play out alongside one another, because they are meant to, and because they wouldn't have it any other way—thus proving the biblical thesis that "it is not good … to be alone" (Genesis 2:18).

All in the Family

Beyond their trips across the universe and their battles against ruthless enemies like Galactus and Dr. Doom—the principal villain in the new movie—the core of the Fantastic Four is found in the adventure of family: learning to trust and retrust, remembering to love, facing the truth about one and all, and enduring to the end as participants in a lifelong covenant.

The Fantastic Four is a family writ large, run through larger-than-life crucibles of change, conflict and crisis that differ from our own crucibles only by degree. And in their earthy, feet-of-clay stories, as in our own family tales, we learn much about how the world and even we work. As G. K. Chesterton notes in his classic study Heretics:

David A. Zimmerman is the author of Comic Book Character: Unleashing the Hero in Us All. Also check out his online column, "Strangely Dim."

1 of 5
Even Fantastic families fightJohnny, Ben, Sue and Reed are a functional 'family'Things are looking Grimm for Ben, perpetually perplexed about his conditionReed is always trying to figure out a way to restore Ben to his former self