On a recent tour of Africa in conjunction with the release of their debut album, Christian band Chronos found the heart of the continent in the form of an infant orphan boy.
Doug Ray|July 11, 2005

Editor's note: Christian rock band Chronos had a unique "release party" in March for their debut album, Downpour: They traveled around Africa, playing nine concerts in 11 days while raising money for a ministry to AIDS orphans. Lead singer Doug Ray said before the trip that it was "about much more than the promotion of our disc." We asked Ray to keep a journal during their trip and write up a brief account of the experience.

The African infant in my arms needed a dad. He needed a mom. And he needed to be loved.

I couldn't give him those first two things, but I sure had plenty of the third. As I held that little one-year-old—an AIDS orphan in Nairobi, Kenya, whom I'll call Jeffrey—I looked into his beautiful brown eyes … and a face that knew more pain than you and I will in a lifetime. Jeffrey's almost lifeless body, stricken with cerebral palsy, felt limp in my arms, but I was immediately taken by his smile, weak as it may be.

And I thought of three generations. I thought of my own infant son, Griffin, back at home, a smiling bowl of jelly with enough love and nutrition to feed all 36 of the children in the orphanage where Jeffrey lives.

I thought of my father, Bob Ray, who 35 years ago had started a Southern gospel group called The Anchors, and whose lifelong goal was to help children in any way possible. My dad died in 1995, not knowing that his heart's desires would be fulfilled in the continuation of his ministry in our band, Chronos.

And I thought of myself—and how I'd gotten here.

It all started one sunny February day in 2004 when Don Tucker, founder of Africa's Children, and I sat down for pancakes and coffee at a local dive in Springfield, Missouri. Don asked if Chronos would be ... 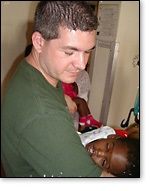