Times have been tough for cinematic singletons. Debra Messing had such a hard time finding a companion in The Wedding Date, she had to hire a male escort. Heather Locklear had to move from city to city in search of The Perfect Man. And now Diane Lane is forced to look for love on perfectmatch.com. What is Hollywood coming to?

We nonfictional single gals have found camaraderie and sympathy in these fictional singlehood depictions—and yet we've also found despair. When Debra Messing, Heather Locklear, and Diane Lane can't find love, what chance do the rest of us stand?

Thankfully, Diane Lane, in her latest romantic comedy turn as newly divorced Sarah Nolan, is allowed to have wrinkles, messy hair days, and a wardrobe that includes nondescript jeans and sweaters. The realism is refreshing. As is a love story not centered solely on the 20-something set. Instead we have jaded 40-somethings taking their first tentative steps toward loving again—mostly pushed by their nosy family members, friends, coworkers, deli counter guys, and manicurists.

In fact, the opening scene finds Sarah being ambushed at a family gathering; each family member has brought a photo of a potential love interest. It's only been eight months since her divorce, but they think it's high time she move on already. When she tosses all these suggested suitors in the trash, her pushy sister (Elizabeth Perkins) creates an ad for her on perfectmatch.com. Cue the parade of freaky single men sporting everything from tears to toupees.

Looking for love at perfectmatch.com, an online dating service

But there's one cyber suitor, Jake (John Cusack), Sarah meets in a dog park (with her brother's hulking dog, Mother Teresa, in tow) who shows some neurotic glimmers of hope. And then one of Sarah's preschool students turns out to have a hot newly single dad, Bob (Dermot Mulroney), who comes with a Ph.D. Both men present complications (date a student's parent? go out with a potential nut-job?), and even more complications arise in the rare moments when Sarah dares to open her heart to the possibility of romance.

Chick flick regulars can guess the rest. An emotional tug-of-war over the two hunky guys (if only real single life was like this!). Consultations with the requisite gay best friend. Misunderstandings and mishaps that keep the couple(s) apart. An a-ha moment of relational clarity followed by a sprint to profess undying love to the Right One before it's Too Late. Cue the big dramatic of-course-it's-always-been-you ending, the dreamy kiss, and the rolling credits with the kicky love song serving as the icing to this celluloid confection. When this equation is done well, we don't mind the predictability so much. We actually like a well-executed escape from the tough realities of love (or lack thereof) in the three-dimensional world. Unfortunately, Must Love Dogs falls just short of this level of quality and instead seems like a somewhat tired return to Romantic Comedy Land.

Jake Anderson (John Cusack) and Sarah hit if off

There are a few diversions from the chick-flick formula that work well here. One is Stockard Channing, looking altogether different from her TV role as The West Wing's First Lady. Though she has to compete with two other women for Sarah's dad's affections (Christopher Plummer) and is given an oddball plot line with another Internet love-interest, she shines in her moments of vulnerability about being adrift in the cyber sea of love in a travel-weary boat. John Cusack is as adorable as ever and rescues some potentially cheesy dialogue and plot lines. The scene in which he turns down his best friend's offer to set him up with the 24-year-old office tramp, stating she wouldn't have near enough depth or intrigue for him, will have women in the audience cheering.

In fact, the theme of men going for much younger women—even leaving their wives for such, as Sarah's husband did—runs throughout the movie. This is only one of the many ways men are portrayed as dogs in this flick. Straight men, that is. I kept a running tally throughout the movie of Men Who Are Schmucks and got to five with main or supporting characters alone. This doesn't even count the Internet date parade. Sure, I've been burned by my share of guys over the years, but the continued theme of straight-man bashing in our current entertainment media frustrates me just the same. Enough already. We're all fallen human beings. We all hurt each other. Men and women. Let's stop highlighting worst-case specimens of the male of the species and get back to our regularly scheduled programming already. 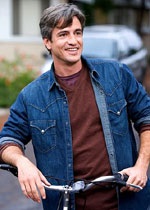 Dermot Mulroney plays a hot single dad ... with a Ph.D.

Diane Lane gives a nice turn as a modest divorcee awash in cuteness. She's a preschool teacher who's surrounded by uber-wise children, endearing dogs, and flirting scenes in the school's puppet closet while sipping juice from a Dixie cup, for crying out loud. Though her hair showcases the greatest range in the flick, Lane herself doesn't overplay the emotional scenes even in her greatest moments of singlehood patheticness. And Sarah offers a decidedly pro-marriage perspective when she admits she never would have left her ex even though she wasn't necessarily happy. She just figured that was the choice she made and she needed to stick with it.

Though Sarah and Jake both give lip service to their desire for real, lasting, deep love, they seem awful eager to rip each other's shirts off at the end of date two. But we do see emotional ramifications of hasty hops in the sack.

The ending is a bit contrived and tries too hard to be cute and endearing. Overall, I wouldn't call the movie a dog, but I didn't love it either. And I wanted to. Our search for the next Great Romantic Comedy, like so many Hollywood singletons' quest for love, continues.

The biggest hurdle here is premarital sex—though we do see emotional fallout for this decision. There's a belabored scene about an across-town search for a condom. You might have to explain to younger viewers what a "boob shirt" is (one that highlights the wearer's cleavage) and why Sarah's dad brings three dates to Thanksgiving dinner. With older kids these plot points could be good discussion starters (as in "what's wrong with this picture?"). One of Sarah's students exclaims "Good Lord" when he gets a bloody nose, an understandable reaction but kind of disturbing coming from such a little guy.

The studios' one significant bit of counter-programming last week was Must Love Dogs, a romantic comedy—starring Diane Lane and John Cusack, with fine supporting work from Stockard Channing and Christopher Plummer—about newly divorced people in their 40s (and an even older widower) who try their hand at online dating.

The film has all the sitcom-style humor you would expect from writer-director Gary David Goldberg (the creator of Family Ties and Spin City), and while some Christian critics seem to wish they could have liked it more, their responses are more mixed.

Andrew Coffin (World) concurs: "You've seen all of this before. But perhaps it's been a while since you've seen it all strung together so ineptly. That's about the sum of Must Love Dogs … a romantic comedy that survives, if at all, solely on the charm of its performers." He adds that the film is surprisingly "disjointed," despite its predictability. "Although only a single screenwriter is credited (the director), one would almost expect to discover that a dozen or more participated, each asked to contribute a single scene utilizing the same cast of vaguely defined characters."

Harry Forbes (Catholic News Service) likes co-stars Lane and Cusack, but says the screenplay "meanders, and some of the plot turns are implausible, even in the context of a romantic bauble like this. And, frankly, it's just not funny enough." He also takes issue with the film's acceptance of casual sex, including an implausible scene in which two characters drive all over town looking for an open store that has condoms in stock. "It's clear to the viewer that each of them is looking for true love. Though they're going through the motions of dating, their hearts aren't really in it, and there's the implicit notion that picking up men … and sex before marriage are par for the course."

Mainstream critics are having trouble loving this particular mutt.

1 of 4
Diane Lane, as Sarah Nolan, and her brother's dog, Mother TeresaLooking for love at perfectmatch.com, an online dating serviceJake Anderson (John Cusack) and Sarah hit if offDermot Mulroney plays a hot single dad ... with a Ph.D.