Versatile director Danny Boyle, the man behind Millions, has made some inventive films that are quite steeped in stories of morality. But he's a little reluctant to admit it ….
by Jeffrey Overstreet |March 15, 2005

Danny Boyle is as enthusiastic in person as his movies are onscreen. Many directors are already tired of talking about their movies by the time they make the rounds doing interviews. But Boyle seems as excited to talk about his high-spirited new family film Millions as most artists are when they begin a project.

When we sat down at the table in a lounge suite at Seattle's Fairmont Hotel, Boyle had a hot Starbucks beverage in his hand. "I can see you're already picking up Seattle habits," I laughed. "Seattle?" he said. "These things have taken over London!"

Boyle behind the camera for 'Millions.'

Boyle's a Brit, but he's no stranger to American moviegoers. The dark and disturbing Shallow Grave, the adrenalin-fueled drug-comedy Trainspotting, the high-spirited romance A Life Less Ordinary, the Leonardo DiCaprio thriller The Beach, the bone-chilling zombie thriller 28 Days Later—each launched by his explosive imagination. Boyle thrills his audiences with visual flourishes that make even his lesser films (that DiCaprio flick, for example) highly entertaining.

Millions is no exception. It has all of Boyle's trademark style and a bigger heart than any of his previous films. If it gets the proper push, it's likely to be his biggest U.S. hit yet. And in the wake of The Passion and its recent controversies, it's surprising to see another film in which the central character is so interested in the kingdom of heaven. So I began our conversation by thanking Boyle for introducing audiences to Damian (Alex Etel), the young dreamer who holds counsel with the saints.

In spite of Damian—a God-fearing boy and a friend of the saints—Millions never becomes "preachy." Was that difficult to do? 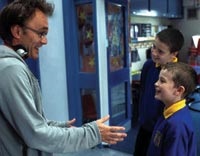 Director Danny Boyle with Alex Etel and Lewis McGibbon on the set.

Danny Boyle: You can go through the whole filmmaking experience being careful, saying, "I've got to make sure this isn't preachy." But you can't make a film like that. What you do instead is concentrate on the essentials, the positives: the character and the kid playing the character. You're saying that this is the way he sees the world.

If the movie works, it's because you realize that life absolutely is that simple, the way Damian sees it. It's not like we're preaching at people and saying, "Don't you see it's that simple? Why can't you do that?" We're actually saying that when you look back at what you were like [at Damian's age], it was that simple. And that's not a bad thing. That's still us, even though we've moved on into the venal world of survival and competition.

Damian and his brother see the world so differently. Damian's generosity and compassion has its roots in his faith. Anthony's materialism, anxiety, and lack of trust are rooted in … what exactly?

Boyle: The whole structure of this story is built around the fact that Damian is 8. This was borne out by the research we did, by the auditions for Damian's role in this film—all of the 10-year-olds, like Damian's brother Anthony in the film, have a foot through the door of adulthood, and they're greedy for more of it. You can't turn back at that door once it's open. But the 8-year-olds—all of them—they didn't have that yet. So it's somewhere between 8 and 10 that it happens.

I've thought about it a lot, because I've got kids. I didn't notice that change in them myself, because when you're bringing up kids, you're bringing them up every day. You're not looking at sample groups like that.

So the whole film is built around the difference between Damian and Anthony and the battle between them. There's the older brother who's always talking about what's real and what's not, what the tax rate is and what it isn't, and what the mortgage is. The younger kid, he's talking about the "unreal." He's not self-conscious about things being unreal, because he doesn't even think about them being unreal. He sees these figures and he communicates with them, and that's his world. And it's tangible and real—it's not imagined.

So when he wins the debate, he gets to spend the money the way he thinks it ought to be spent, because they've all tried to do something that they wanted to do with it, and they've all failed. It's like that phrase, You keep what you've got by giving it all away.

That sounds like the refrain of almost every U2 song.

Boyle: It does! I was actually thinking of that song by Ian Brown, the guy from the Stone Roses: "Keep What Ya Got."

So, it sounds like we're to understand that Damian really does have these encounters with saints, right? Or is it instead that he's a kid with a really active, healthy imagination?

Boyle: Wordsworth, in one of his poems he talks about childbirth. You're born from the sea, and as you walk up the shore, you know where you've come from, and you can see your Creator. But once language (your ability to describe things) arrives, you've just come over the brow of the hill. And you look back and you can't see it anymore.

Before the point of language arriving, you're still in touch with your source. When you look at babies, there's something in their eyes sometimes. They look over your shoulder sometimes, and they're looking at something. And you look back, but you've lost it. And you think, "What are they looking at?" So I think there is something in that.

It's a brave thing to bring up religion in a movie these days. It was so controversial for Mel Gibson to put The Passion of the Christ on the screen, but that came from a deep sense of religious conviction. Is there any personal resonance for you with the iconography of Catholicism and the Christian tradition that inspires Alex's imagination?

Boyle: Oh, yeah, I was brought up a very strict Catholic. My mom was a devout Irish Catholic and she wanted me to be a priest, until I was about 13. One of her favorite saints was Our Lady of Fatima. So I was surrounded by it as a kid. My mom has been dead since 1985, but the film's dedicated to my mom and my dad.

I think the important thing about Damian's relationship with the saints is that it's his imagination. That's what allows him access to them or not. It's about whether you believe. Some people believe they're real—even some people making this film think they're real. Others think they're just flights of the imagination. But Damian is an artist, and he has access to that. It will take him different places as he gets older. So it's not like he's a religious figure. It's faith that's linked to the imagination—the power of taking a leap—rather than it being faith in a strictly conventional religious sense.

You made Millions soon after the zombie movie 28 Days Later. You've done wild romantic comedies and now you've got a sci-fi project in the works. Is there a central theme or a moral question that runs through your projects?

Boyle: As soon as you say they're about morality, you're heading in that territory where things become preachy. But there is a moral factor to them, yes. I think all you try and do is test your own principles against ideas.

I personally accept that we've left behind ideologies. As Westerners, we've become what we are: consumers. But within that, there remain principles that you do have or you don't have. And you can test them in certain circumstances through stories.

I try to put an energy in my films that's life-affirming, that's redemptive. Sometimes what it's looking at is awful. Like Trainspotting—what's going on there is awful. But there's an energy level that's running through it, life pulsing away, in ways that are unacceptable and unpalatable. But it's pulsing. And that in itself is a victory, I think.

Tell me about the boys you chose for the roles.

Boyle: I chose Alex because he walked through the door, and I saw him out of the corner of my eye, and I went, "I'll be, that's him." When you do that, you have to be really tough with them because you want to make sure you're not casting them just because they look right. So you have to audition them quite tough. Alex auditioned and he was really interesting. He wasn't very good, and that put off a lot of people. And a lot of people wanted this other guy who was a much better actor. But you don't want an actor—you want a presence who's actually going to live in this world.

You're such a creative, versatile artist. When you look at the top ten at the box office, does it discourage you to see such derivative, disposable work like Boogeyman or Are We There Yet? at No. 1 when there are better films showing?

Boyle: Imagine what it's like if you work in a garage, or you work in a superstore, all week, and then Friday night comes along, and you've spent all week dealing with whatever you're dealing with, and you get one chance to take a girl or to go with your mates for a good laugh. That is part of our job. Entertainment.

The power of those people with their money will always make sure that the industry delivers to them certain kinds of entertainment. But you have to be very careful that we don't turn the movies into opera, which is like, "They're good for you, they're a bit specialized, and they'll be a bit beyond some of you." Within that, you've got to be, like Scorsese says, "cunning." You've got to smuggle good ideas into something that attracts that person to the Friday or Saturday night film. That way they get a bigger kick out of it than they do from those films you're talking about. That's the job. It's not like you've got to ban the bad films. You've just got to make better films more entertaining.

(A longer version of this interview is posted at Looking Closer.)

1 of 2
Boyle behind the camera for 'Millions.'Director Danny Boyle with Alex Etel and Lewis McGibbon on the set.