As one of today's most successful and beloved Christian artists, Rebecca St. James is no stranger to audiences. But some might have been surprised to learn that St. James, 27, quietly experienced burnout and fatigue a few years ago. When artists struggle, where do they turn for guidance and encouragement? In St. James' case, to someone like Evie Tornquist. A pioneering Christian pop artist from the 1970s, Evie—like Rebecca—rose to stardom as a teenager and faced many of the same struggles before retiring in 1981. So naturally, the 47-year-old wife and mom also makes a perfect mentor for St. James.

Tornquist was inducted into the Gospel Music Hall of Fame in February 2005, with St. James on hand to present the honor. Christian Music Today was on the scene and had a chance to chat with both legendary ladies about mentoring and ministry, capturing a snapshot of their wisdom and friendship.

Rebecca, how did you first come to know Evie?

Rebecca St. James Well, she actually knew me before I knew her! Because she held me when I was just a baby …

Evie Tornquist When she was about a year or two. I was in Sydney for a concert tour. Her dad and uncle had a band, and we were all performing together at the Sydney Opera House.

St. James So Evie was always a household name for me growing up. And my parents spoke highly of her from their experiences. [Rebecca's dad was a concert promoter in Australia.]

Later on in life, when we were doing my tours in America, Evie would visit our shows with her family when we came through Florida, as far back as '96 or '97 for the God album tour. And we got along well as kindred spirits with similar personalities, similar giftings, a love for people, and of course, a love for God and a desire ... 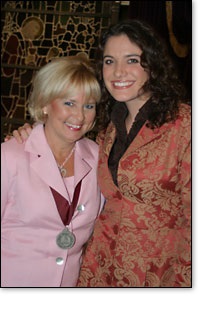