Who was Joan of Arc? Loony schizophrenic? Demon-possessed adventurer? Or was she the saint that the Roman Catholic Church in 1920 made her out to be?

Joan of Arc lived during a chaotic time in France's history—England occupied Paris and much of the country during the Hundred Years' War (1337-1453). A peasant from the French village of Domremy, Joan reportedly began receiving visions from God in 1425 at the age of 13. She was to go to the French Prince Charles (Dauphin), or so the "visions" said, and offer her services in the fight to relieve the city of Orleans besieged by the offending English.

Joan's leadership in the defense of Orleans is legendary, and the subsequent coronation of Charles was likewise the crown of her success. But Charles' refusal to support her attack on Paris (the film speculates Charles was jealous of Joan's fame) was but the first turn of misfortune that led to Joan's capture and trial by the English. The English sympathizer Bishop Cauchon charged her with 70 counts of heresy, and on May 30, 1431, Joan was burned at the stake at the age of 19.

The tale is fraught with conundrums. What (or who) convinced this peasant girl to take up the sword and lead the French army to war at a time women were expected to stay within ... 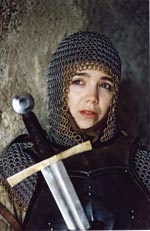