At first, The Pacifier looks like mindless entertainment. And, well, that's mostly what it is throughout.

Directed by Adam Shankman (Bringing Down the House and A Walk to Remember) and written by Thomas Lennon and Ben Garant, the film begins in all the wrong ways: silly dialogue ("I know we've been up for 72 hours, but I expect perfection!"), clichés and predictability (it's a film with babies, so the diaper humor just keeps on comin'), and complete abandonment of the "Show us, don't tell us" policy ("We are [Navy] Seals: this is what we do!"). During the first third of the movie, I couldn't rein in my sass: "The Pacifier?" I thought, "Someone ought to pacify this movie!" Or maybe: "Vin, what were you thinking when you signed up for this movie?"

Vin Diesel's having a ball in 'The Pacifier'

But about 30 minutes into the film, one of two things happened. Either the 12-year-old kid inside me wrestled and defeated my movie critic within, or the movie actually picked up and got pretty funny the rest of the way.

Vin Diesel (Pitch Black, The Chronicles of Riddick) plays Shane Wolfe, a Navy Seal assigned to care for the family of a government scientist, Howard Plummer (Tate Donovan), who was killed by rebel Serbians because of a high-tech security device, GHOST, that he created for U.S. defense. Since the device is believed to be at the late scientist's residence, Wolfe reports for duty at the Plummer house and meets Mrs. Plummer (Faith Ford); the housekeeper, Helga (Carol Kane); and the five Plummer children, headed up by Zoe (Brittany Snow). 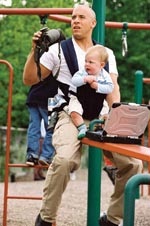 Shane Wolfe (Diesel) has his hands full with all the kids

Mrs. Plummer departs for a two-week trip in order to take care of business regarding her late husband and Helga quits soon after, leaving Shane alone to baby-sit the Plummer children for the remainder of the two weeks—or the ...