There's a scene in The Upside of Anger when Terry Wolfmeyer (Joan Allen) walks into her daughter's bedroom to find Andy, the second of her four daughters, under the covers with Andy's boss. The boss, "Shep," is easily twice Andy's age—and just happens to be this movie's writer and director, Mike Binder. There isn't any dialogue, per se, but the series of facial contortions and exasperated shrieks that follows and culminates in Terry storming out of the room leaves Andy (Erika Christensen) with no doubt as to her mother's opinion on the situation. Andy slumps back on her pillow while Shep, in sleepy bewilderment, says something to effect of "Wow, that was intense."

Indeed. Intense is a good way to describe Joan Allen's performance in The Upside of Anger. Other words that come to mind are acerbic, witty, and perfect.

Kevin Costner is no slouch either, as Denny Davies, a boozy former baseball player turned radio talk show host who lives in the neighborhood and slides into the picture when he sees an opening left by the abrupt departure of Terry's husband. In a career move reminiscent of Jack Nicholson in Terms of Endearment, Costner has reintroduced himself to the movie-going public as a flawed, but endearing and earnest soul.

Unfortunately, these two outstanding performances aren't given much of a viable dramatic context. It sounds compelling and all the pieces seem to be there—a husband disappears, ostensibly with his Swedish secretary, leaving his beautiful family to work through the resulting emotions, namely anger, and pick up the proverbial pieces. The four daughters are played by a group of been-around-but-still-up-and-coming actresses—Alicia Witt, best known for her work on Cybil, plays the oldest, Hadley; ... 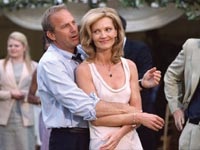