How that fictional galaxy far, far away helped me better understand the very real galaxy that I live in right here, right now—and the God who created it.
by Todd Hertz|May 24, 2005

I was born in February of 1977—three months before the birth of Star Wars. I've never known a world without Jedi, protocol droids or Darth Vader. For 28 years, and now with the conclusion of the cinematic space saga, I've seen how a fictional galaxy far, far away has affected my view of the real one I'm living in right here and now. 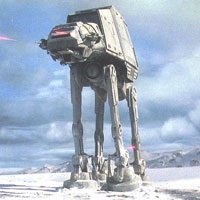 My first life memory is of giant AT-AT walkers slowly thundering across the ice fields of Hoth—and seemingly out of the theatre screen, right at me. A toy Millennium Falcon nearly as big as I was and several 6-inch plastic Rebels were my best playmates for years longer than probably healthy. And on our way to Little League practices, my friends and I regularly reenacted dogfights versus TIE fighters in the back of my mom's station wagon.

The fascination didn't end there. Entire conversations my friends and I had using quotes from Jedi Master Yoda. In college, the only time I ever got in trouble was for loudly arguing with my roommate at 3 a.m. about whether or not the Rebels were briefed about Endor's indigenous life forms, the Ewoks (I say they weren't). And to this day, I often have actual dreams about Star Wars—of both being in and watching the films. (By the way, I've dreamt about seeing all three prequels before their actual releases and while the first two pre-release dreams were prophetically disappointing, my dream version of Revenge of the Sith was appropriately incredible.)

I know what you're thinking, so let's just get right to it: I'm a geek. I admit it. (But some important facts: No, I've never gone to the theater in costume or waited overnight in line for tickets. And yes, I have been on a date or two.) But I think these movies had such a powerful effect on me for a reason beyond my own geekiness. Instead, it points to something deeper: the power of story.

I'm the first one to recognize that George Lucas is no icon of great screenwriting. Plot? Sketchy at times. Dialogue? Sketchier. Three-dimensional characters? Eh. But what you can't deny is Lucas as storyteller. The man can tell a story. But with Star Wars he went further: He created a fully populated universe of awe, wonder, and imagination that sucked me in, not to just watch a movie but to absorb myself in its world.

Many compelling stories do this—The Lord of the Rings and The Chronicles of Narnia among them—but Star Wars was the vehicle that set my mind reeling because it was so accessible as a larger-than-life, super-hyped, and visually fueled film during my formative years as a boy with an over-active imagination.

Actually watching the movies was only half of the picture. The original trilogy was more than something I saw. It was a place I went. The first real impression I had of the films was how large everything was—not just the AT-ATs or the Wookiees, but also the scale of the story. The Star Wars story made my world seem much bigger and, thanks to the epic good vs. evil overtones, mean much more. It made me long for a world like that. In fact, Lucas created a story so big and far-reaching that I was invited in and allowed to create sections of it for myself. It wasn't a closed story, and it helped me sharpen my imagination. The films featured many wonderful aliens, worlds and stories, but often told us very little about individual characters, events or places. So, to fill in gaps, I'd act out or write stories about what the Clone Wars were, what Han did after the trilogy, and what Ord Mantell was like.

Just a few of my Star Wars toys

I remember getting a green-faced ugly alien with a light brown tunic for my 7th birthday. I had no idea who the alien was. If it weren't for the packaging, I wouldn't have known he was even from the Star Wars films. Now, I recognize that alien as background dressing in Jabba's palace. But back then, I had to create my own story for him. To me and my other plastic warriors, FrogFace (my affectionate name for him) was a courageous double agent who helped Han and Luke infiltrate the Empire. Along with FrogFace, my other Star Wars ships, figures, and playsets would continue Lucas' story with our own adventures—ones where Luke would pretend to go over to the Dark Side to trick the Emperor, where Vader would seduce massive Transformers to join the fight against the Rebels, and where Han would set out to the vast world of Living Room to protect the Christmas Tree Region from attack.

The reality of the myth

The ironic part of my longing to live in a supernatural world with so much adventure, meaning, and battles of good vs. evil is this: I already did. I was drawn to these ideas for a reason far greater than George Lucas. In fact, this is part of what makes Lucas' vision so popular: His storytelling taps into something deeper than how cool lightsabers were. And that wasn't by accident. It was something Lucas methodically worked at.

Before writing Star Wars, Lucas studied the works of scholar Joseph Campbell, author of several books analyzing the connections between various cultural myths and world religions. In a documentary about the making of the original trilogy, Lucas says, "I did research to try and distill these myths down to motifs that are universal. I attribute most of the success [of the films] to the psychological underpinnings, which have been around for thousands of years. People still react to those stories as they always have."

In Star Wars, you see traces of Arthurian legend, Shakespeare, The Odyssey, Beowulf, the Bible, Eastern religions, and other old histories, stories, legends and myths. Lucas took the classic good vs. evil morality tale, mixed in universal themes—father versus son, technology versus nature, student versus teacher, the allure of evil, youthful adventure, faith, redemption, friendship and betrayal, and the journey from zero to hero—and sprinkled in archetypal characters like the unlikely hero, the damsel in distress, the reluctant hero, the wise old teacher, the ominous villain and the comic relief. Then, he added spaceships and Wookiees.

Father-son tension is just one of many themes

All of these motifs, archetypes and psychological hooks provide a buffet of connection points. Can't relate to the father-son tension? Then maybe you'll get caught up in the heroic journey of a boy with big dreams. For me, the biggest pulls were always the idea that there was more to life than what I saw out my front door and the belief in something bigger surrounding us, guiding us and driving us in a very real battle against evil. Of course, both of these draws tie into my Christian beliefs, but I won't argue that Star Wars taught me anything about our God. No, Empire Strikes Back didn't supplement my Sunday school flannel graph lessons.

But I do think there's a connection. George Lucas purposely pulled universal motifs, story devices and legends that had captured human hearts for centuries. By doing so, I think he pointed to something far larger than just cultural mythology and psychological underpinnings. I think he looked at the question of "What universal themes do we all relate to?" I, however, think the far more important question is: "Why do these motifs pull on our hearts?"

The truth is, the draw of these themes in pop culture or ancient myth shows the power of the void we all have engrained inside us, a void that, for each of us, thirsts for the same things—a sense of adventure, a belief that there has to be something bigger than all this, and a desire to overcome evil. These thirsts lead to our Creator.

Yes, Star Wars is a great story that has stuck with me my whole life, but only because it happens to tap into the questions only truly answered in the Greatest Story—the one calling us to a God not so far, far away.