Give Domino credit for honesty, sort of. The film begins, as so many do, by saying that it is based on a true story. Then two extra words appear on screen: "sort of." That seems like fair warning. The film, which concerns a movie star's daughter who became a bounty hunter, is written by Richard Kelly, who wrote and directed the trippy cult hit Donnie Darko, and it is directed by the always hyper-stylish Tony Scott, who never saw a jump cut, a freeze frame, a saturated color or a gratuitous subtitle he didn't like. You know how the dialogue in Scott's last film, Man on Fire, was sometimes echoed on the soundtrack or spelled out on the screen, just to make sure we didn't miss it? Domino repeats these tricks, and more. So we don't exactly enter the theatre expecting authenticity or realism. 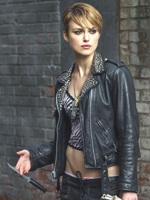 Still, if every movie that claims to be based on a true story contains a strong dose of fiction, then it stands to reason that a movie that claims to be only "sort of" based on a true story will be practically nothing but fiction. And that does seem to be the case here. The real Domino Harvey would have been 36 now if she had not died of a drug overdose a few months ago, but the movie version is barely out of her teens—just like the actress who plays her, 20-year-old Keira Knightley. Domino's father, Laurence Harvey—best known for starring in A Room at the Top, which ushered in the New Wave of British cinema, and for co-starring in Hollywood films like the original version of The Manchurian Candidate—died when Domino was just a girl, and that fact, at least, survives into the film. But the film dates his death to the early 1990s, some two decades after it actually took place.

And that's before we get to the story, which throws in so much made-up material it begins to seem like lots of other films—particularly those directed by Guy Ritchie, Oliver Stone and, well, Tony Scott—and whatever pure human truth we might have gleaned from Domino's story is lost in all the sound and fury. Scott and Kelly say they have exaggerated certain facts about Domino's life in order to take us into her rebellious, punk-influenced, fever-dream state of mind. Too bad, then, that her mind was so much like a movie.

Domino has some words for Taryn (Lucy Liu)

Actually, it's worse than a movie—it's television. Domino tells us that her mother (played by Jacqueline Bisset) moved with her to California after falling for the culture or lifestyle depicted on Beverly Hills 90210. Later, after scrapping with a fellow model and a sorority girl, Domino takes up bounty hunting, under the tutelage of two mysterious figures named Ed (Mickey Rourke) and Choco (Edgar Ramirez)—and it isn't long before Christopher Walken shows up as a quirky, driven TV producer who hopes to create a "reality TV" series based on their adventures, like a sexier, edgier version of Cops. He even casts former 90210 regulars Ian Ziering and Brian Austin Green as hosts; and thus this film blurs the line between fact and fiction even more, since the two real-life "celebrities" poke fun at their own images by playing spiteful, clueless versions of themselves. (The bounty hunters can't stand them.) There is even a bit of social commentary, when one character with strong opinions about race relations appears on a typically feisty episode of Jerry Springer.

The restless editing so typical of television is compounded here by smaller, fleeting details, like Scott's cutaways to intense close-ups of Domino's rear cleavage, a string of saliva hanging between a person's mouth and her straw, and similar images. And then there is the music, which makes abrupt shifts in tone from soft and sensitive to bumpy and gritty, depending on what the scene—or shot—demands. Domino resolves one early standoff with a bunch of gangstas by offering to perform a lap-dance—cue the music! A woman bucks up her courage by quoting Billy Ocean—cue the music! And some of the more particularly violent scenes are accompanied by Tom Jones' "Mama Told Me Not to Come" and Bach's "St. Matthew's Passion"—whatever the pyrotechnics seem to demand.

As a popular media artifact that is, itself, grounded in other popular media artifacts, Domino is so ironic and self-conscious that, at times, you wonder if Scott is mocking himself as much as his characters. In one scene, one of Walken's assistants (Mena Suvari) says of him, "He has the attention span of a ferret on crystal meth," and that's as good a description of this film's own jittery, hyperkinetic, can't-sit-still aesthetic as any. In another scene, Dabney Coleman chastises his own assistant for reiterating the instructions he has been giving to someone else ("What are you, a … mockingbird?"), and it seemed to me that Coleman was voicing my own frustration with the way this film constantly underscores certain bits of dialogue by replaying them and typing them out after we've already heard them.

Even if Scott is ribbing his own use of clichés, though, the fact remains that he still uses them. And prominent among them is his use of religious themes and imagery in a way that is so portentous it is actually quite glib; rather than imbue his film with a sense of the sacred, they become just another way for him to push our emotional buttons. (See the Bach reference above.) Domino tells us that her life is a series of coin tosses between life and death—and the recurring image of a coin flipping in the air is played against the backdrop of an icon of Christ. At one point, when Domino and her buddies are stranded in the desert after reaching a moral and professional low, a Tom Waits gospel number ("Jesus Gonna Be Here") comes up on the soundtrack, and a preacher arrives from out of nowhere to tell them how they can resolve their little dilemma. And lo and behold, he tells them all their actions will be justified because they will be committed for the sake of a little girl.

It's the same sentimentalist morality Scott peddled in Man on Fire, but now, there's more, and it's loopy: the preacher predicts that this girl will be a great leader some day. Ah, a whiff of destiny. But of course, the film doesn't really believe in any of this; the prophecy is just another of the many ways in which this film wears its artificiality on its sleeve.

Early on, Domino tells us that her childhood experiences with death convinced her not to form emotional ties, because they would only lead to pain. In a way, the film honors that sensibility, by preventing us from connecting with Domino herself. But we do get a hint of how different this movie could have been; the last line in the film is also the most poignant, mainly because we know the real Domino died so recently. No doubt an interesting story could be told about her life, but this standard-issue assault on the senses isn't it.

Manohla Dargis of The New York Times says that Tony Scott's Domino "has to its great credit absolutely no social value outside of a feverish will to entertain, though that might prove tricky, since its assaultive wild style seems designed to repulse as well as attract."

Christian film critics would say they're repulsed by the film, rather than attracted to it.

Domino is an action movie loosely based—very loosely—on a true story about a bounty hunter named Domino Harvey who came from London and went to work in South Central Los Angeles. It's basically a genre film, scripted by Richard Kelly, who wrote Donnie Darko, a film that's become a cult favorite even amongst Christian film buffs. Following Harvey's descent into a violent and degrading world, where she embraces violent and sexually degrading tactics to complete her missions, it's likely that it will be heralded as a story of "female empowerment." But it's closer to the mark to say that the film entertains audiences with the shameful antics of an unprincipled woman.

It's also worth noting that while the film celebrates Harvey as a hero, the real Domino Harvey (who makes a brief appearance, tongue firmly in her cheek) was charged with drug trafficking after struggling with addiction for more than a decade. After this film was packaged and ready for theaters, she was found dead in a bathtub, with toxic levels of painkillers in her body. A sad end to a pathetic story … one that isn't included in this film.

Marcus Yoars (Plugged In) says, "Show, don't tell. It's one of the guiding rules of creating art. Apparently, director Tony Scott believes in doing both—in excess. … The result is a dark, grubby environment full of depraved characters and a ridiculous plot only made more senseless through its unwarranted violence, sex and profanity."

Most mainstream critics are knocking Domino down.

1 of 4
Keira Knightley stars as model-turned-bounty-hunter Domino HarveyDomino has some words for Taryn (Lucy Liu)Mickey Rourke as Ed Moseby, one of Domino's fellow bounty huntersEdgar Ramirez as Choco&mdash;yes, still another bounty hunter