There are twenty names on the poster for Nine Lives, and they represent a remarkably strong ensemble of talented actors. Director/writer Rodrigo Garcia (Ten Tiny Love Stories, Things You Can Tell by Looking at Her) seems to have no trouble attracting gifted people to his projects, and his new film captures such uniformly moving and believable performances, it's easy to see why.

Nine Lives is really a series of nine short films featuring nine female characters. Each vignette consists of a 10-14 minute emotionally charged slice of the character's life, shot elegantly and inventively in a single continuous take. Reportedly filmed in just 18 days (2 days per story), the approach is exhilarating rather than gimmicky, and the actors seem to relish the challenge, giving full-blooded, convincing performances that seldom ring a false note.

The movie opens in the claustrophobic corridor of a women's prison, and we are introduced to an inmate named Sandra. Played with sullen intensity by Elpidia Carillo (also in Garcia's Things You Can Tell by Looking at Her), Sandra works feverishly to earn the privileges "good behavior" can buy her, only to erupt in rage when her monthly visit with her young daughter is sabotaged by a malfunctioning prison phone. In the 12-14 minutes Garcia spends on Sandra, we are given a nuanced and powerful study of conflicting emotions—regret, defiance, grim determination, longing, and despair.

The stories that follow move from Sandra's literal prison to a variety of emotional ones. Robin Wright Penn (White Oleander, Message in a Bottle) gives arguably the film's finest performance as Diana, a married woman pregnant with her first child who becomes completely disoriented when she runs into her old flame Damian (Jason Isaacs) in a grocery store. The confusion of tension and attraction between Diana and Damian is palpable and unexpectedly moving.

Next we meet Holly, an emotionally distraught young woman played by Lisa Gay Hamilton (TV's The Practice). Holly returns to her childhood home and waits, troubled and manic, to confront her stepfather over serious traumas inflicted in the past. For my taste, there are a few over-the-top moments in this episode, but it could be argued that Holly is dealing with an over-the-top situation that makes her unraveling believable and even appropriate.

Holly Hunter and Stephen Dillane as a couple with some issues

The fourth vignette features Sonia (the always affecting Holly Hunter) and her boyfriend Martin (Stephen Dillane). The camera follows the couple on a visit to see their friends' posh new apartment, winding down long hallways and into the elevator, where we suffer through Sonia's claustrophobia with her. In Sonia's story, the tension is less overtly dramatic than in some of the other scenes, but the emotional impact is no less shattering when Martin vindictively reveals a wounding secret to the couple's friends.

Nine Lives' next chapter stars Amanda Seyfried (Mean Girls) as Samantha, a teenager torn between two needy and politely estranged parents. Samantha's wheelchair-bound father, Larry (Ian McShane), and emotionally-drained mother, Ruth (Sissy Spacek), assure her they'll be fine if she leaves home for college, and yet they can't seem to give her the space she needs to travel from the kitchen to the privacy of her bedroom.

The film's sixth story revolves around Lorna (Amy Brenneman), who attends the funeral of her ex-husband Andrew's second wife and discovers that many of the mourners blame her for the suicidal death. Andrew's inappropriate but urgent sexual advances further complicate the situation.

In his seventh vignette, Garcia circles back to Ruth (Spacek) and lets us see more deeply into her conflicted life. While daughter Samantha and crippled-husband Larry are presumably at home, Ruth is entering into a hotel room and potential adultery with a gregarious suitor named Henry (Aidan Quinn).

Ten minutes later we meet Camille (Kathy Baker), a cancer patient who rants generally at the world and specifically at her husband Richard (Joe Mantegna) as medical staff prepare her for a mastectomy. Camille's terror and rage have her jumping out of her skin, but as tranquilizers take their effect her face softens and we catch a glimpse of the woman she is in health. In one of Nine Lives' most tender moments, we also see Richard's love and aching concern for his wife. 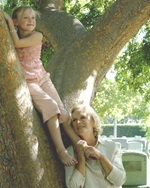 Glenn Close and Dakota Fanning as mother and daughter

In the final act Garcia gives us Maggie (Glenn Close) and her daughter Maria (Dakota Fanning), engrossed in easy and tender conversation during a graveside picnic. Both actors inhabit and imbue the scene with understated grace.

There are few obvious connections between the nine lives in the film, at least circumstantially. In fact, the stories are so complete unto themselves that the odd time a character does overlap (Sandra's prison guard is Holly's stepfather, for example), the connection is more distracting than cohesive. That Garcia manages to give us such distinct and engrossing characters in each story is a filmmaking triumph, but it also asks a lot of the viewer. We've just settled into one world and we're jolted into another—nine times.

Occasionally I found myself longing for some plot development or the articulation of an idea that would tie all of the chapters of Nine Lives together. Yet I was ultimately frustrated by the film's few attempts to express an overt overarching philosophy. Henry offers up some folk-wisdom about the connection between all people, Maria asks about the nine lives of a cat, Maggie affirms that "we all go on"—but none of these larger statements ring as true as the smaller, more nuanced moments that make each scene so believable. It's tempting to say that Garcia—the son of acclaimed Columbian novelist Gabriel Garcia Marquez (One Hundred Years of Solitude, Love in the Time of Cholera)—is a better storyteller than he is a philosophy teacher. And yet I suspect there is plenty of philosophy seeping through the stories that Garcia tells. There is an abundance of tension, conflict, resilience, sexual attraction and familial love in the nine lives Garcia offers for our inspection. But in all of the film's ultra-natural dialogue, there is a distinct void of anything super-natural—of any suggestion that there is help or hope beyond our own wills and choices. Such an ideology leaves a reviewer with my bent toward faith in a quandary. Here is a film chock full of astonishing performances, inventive cinematography and superbly crafted writing. It is, in a word, transcendent. And yet it leaves me dissatisfied because I suspect it aims to tell me that there is no transcendence at all, only a reality exclusively of our own making.

Watching Nine Lives had me tense, engaged, sometimes disgusted, sometimes moved, and always interested. It reminded me of a collection of Flannery O'Connor short stories I keep around to read when I'm feeling brave. Like O'Connor, Garcia possesses a rare gift for developing character in a concise and economical way, the courage to look life's darker realities square in the eye, and an ability to find something of the spirit even in the midst of pain. But where the spirit O'Connor finds is holy, Garcia's is human. He's an ingenious and eloquent storyteller. But he leaves me wanting more.

Note: This film is showing in limited theaters from Oct. 14-27, but will expand to more on Oct. 28. For a list of screenings, check the official website.

Talk About It (contains spoilers)

Nine Lives is rated R for frequent profane language, as well as some sexually suggestive dialogue. There is one explicit sex scene, but no nudity. There is an implication of incest and a disturbing image of a homicidal/suicidal woman with a gun.

It's nine big screen stories for the price of one in director Rodrigo García's Nine Lives.

Garcia's film follows the lives of nine women through realistic vignettes about their differing lives. Mainstream critics are powerfully impressed, saying that Garcia's movie is "a quantum leap better than its forerunners"—Things You Can Tell Just by Looking at Her and Ten Tiny Love Stories.

Harry Forbes (Catholic News Service) says, "Here you have nine movies for the price of one, and though not all are equally good, each is worthy, and several are outstanding. … Garcia has fashioned a thoughtful—and often sad—meditation on mankind's interconnection. … Garcia's dialogue has extraordinary naturalness about it, which, together with the perfectly judged performances, surmount the occasional slow patches. … Though its quiet power won't be to every taste, 'Nine Lives' feels like the stuff of life, warts and all."