The third film in the popular end-times stories will roll out this weekend not to theaters, but to churches—and more than 3,000 screens. We got the scoop from Peter Lalonde, who has produced all three movies.
by Mark Moring October 18, 2005

While the Left Behind books have made millions and topped bestseller lists for years, the first two movies based on the popular series—Left Behind and Left Behind II: Tribulation Force—have quietly slipped in under the radar screen. Neither film was a hit in theaters, but both had moderate success in video sales—enough to keep the franchise alive and to commit to a third film, Left Behind: World at War, which opens nationwide this Friday.

Note that the previous sentence did not say "opens in theaters nationwide," because Cloud Ten Pictures, which produces the movies, is taking a radically different approach to this film's distribution: They're releasing it to churches, where it will show on more than 3,200 screens on opening weekend. (As a comparison, The Fog, last week's No. 1 film at the box office, showed on 2972 screens.) The film will then be available on DVD the next week, on October 25.

World at War, a self-described "End-Time Political Thriller," is based on the last part of the book Tribulation Force, by Tim LaHaye and Jerry Jenkins. Academy Award winner Louis Gossett Jr., playing the role of President Gerald Fitzhugh, joins the returning cast of Kirk Cameron, Brad Johnson, Chelsea Noble and Gordon Currie for this latest film.

Peter Lalonde, CEO of Cloud Ten Pictures and producer of the Left Behind films, promises this will be the best one yet, partly because of a much larger budget—thanks to Sony Pictures, which is distributing the film. In this e-mail interview with Christianity Today Movies, Lalonde discusses his love of film, the history of the Left Behind movies, the strategy to roll it out to churches, and his hopes for a nice "box office counted in souls."

Join in on Facebook
Tags:
None
Posted:
October 18, 2005
More From:
Mark Moring 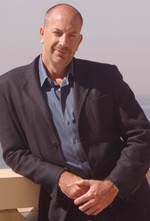