Bring out the Wensleydale, and don't forget the crackers! At last, The Curse of the Were-Rabbit is the feature-length film that Wallace & Gromit fans have been waiting for. How long have we been waiting? Well, let's put it this way. While Wallace, the dim-witted but enthusiastic inventor of overcomplicated gadgets, and Gromit, his mute but much savvier dog, continue to pop up in the odd two- or three-minute short on British television, this film marks their first significant trip to the big screen since the Oscar-winning half-hour short A Close Shave came out ten years ago. Pixar had just released its first full-length movie, the top-grossing film of all time was still E.T., and no one had ever heard of Harry Potter.

Wallace and Gromit get ready for their first feature-film adventure!

That's all changed, now, and in a way it doesn't matter. The Wallace & Gromit short films have always had a nostalgic sensibility, so they don't really need to keep up with the times; their push-button-operated contraptions are a throwback to the pre-digital age, and the films themselves regularly parody classic film genres such as film noir and old-fashioned horror. (Among other things, The Curse of the Were-Rabbit has fun tweaking the clichéd use of organ music and lightning flashes.) But creator Nick Park and his team, including co-director Steve Box and co-writers Bob Baker and Mark Burton, are fond of pop-culture references—their previous film Chicken Run was a veritable pastiche of movie quotes—and so, as the opening credits scroll by over a series of photos showing how Wallace and Gromit have grown over the years, we see Gromit holding a diploma from a school called Dogwarts. Cute!

The story this time concerns a Giant Vegetable Competition, and while our heroes plan to enter it themselves (Gromit fondly pats an enormous melon while listening to the Venus movement from Gustav Holst's The Planets, here re-named "The Plant Suite"), they also provide the security for all their neighbors' greenhouses and backyards. Under the brand name "Anti-Pesto," they have set up secret cameras inside garden gnomes and the like, each one linked to a portrait of the client that hangs on the wall back home; so whenever a rude little rabbit hops into someone's garden and tries to make off with, say, an absurdly large pumpkin, the eyes in that client's portrait light up, and Wallace and Gromit are swept away, dressed up, and sent off by their machines to go catch the floppy-eared intruder.

Our heroes are on the move with their Anti-Pesto S.W.A.T. Team

Like all entrepreneurs, Wallace (voice of Peter Sallis) and Gromit are always on the lookout for the customer who writes the really big checks, and one day she comes calling. Lady Campanula Tottington (Corpse Bride's Helena Bonham Carter) has a major infestation problem, and while her arrogant would-be suitor Victor Quartermaine (Ralph Fiennes) is all too eager to blast the bunnies to kingdom come, she prefers the humane approach. And so Wallace brings out the Bun-Vac 6000, a powerful machine that sucks the rabbits into the holes they've made all over the estate, through the tunnels they've burrowed, and up into a big glass receptacle. One of these bunnies is yanked down into its hole a fraction of a second before Quartermaine takes a shot at it, and as it flies through the tunnel and toward the light of the Bun-Vac 6000, it apparently thinks it has died and is going to heaven. In fact, it is destined to live in a cage in Wallace and Gromit's cavernous basement, where the rabbits threaten to make a bigger mess than the sheep that lived there in A Close Shave.

Business is going well, but then disaster strikes. A terrifying creature seems to be striking multiple gardens at once, and the Anti-Pesto squad just can't cope with it. What's more, Wallace, who has been attempting—unsuccessfully—to brainwash the rabbits with his Mind-Manipulation-O-Matic machine, seems to be missing whenever the creature strikes. One thing leads to another—including scenes that pay homage not only to werewolf movies but also the likes of Hulk and King Kong—and suffice it to say that if the trigger-happy Lord Quartermaine hits his target, the consequences for our heroes could be dire indeed. 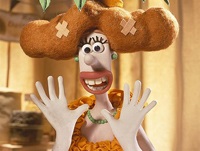 What follows is full of the British wit and kinetic action-movie thrills that have made Nick Park's cartoons so popular. Puns abound, from the "dogfight" between two dogs on a moving plane to the titles of books and newspaper articles, and fans of Watership Down—another movie about rabbits—will appreciate the quick reference to that film.

However, some parents may also be a bit chagrined to find that this film is also leavened with a fair dose of suggestive humor and innuendo that was virtually unknown in the earlier short films. True, the name Wendolene Ramsbottom—Wallace's almost-girlfriend in A Close Shave—was somewhat chuckle-worthy, but their romance was essentially a case of innocent puppy love, amplified by sappy music. The Curse of the Were-Rabbit is somewhat bawdier. Instead of innocent attraction, there is lustful temptation, though it is usually expressed in the form of succulent vegetables. Wallace is also quick to pucker up whenever he thinks Lady Tottington wants a kiss, though that can be written off to his daffiness. Some puns may fly over the heads of American audiences, such as when Lady Tottington says, "Just call me Tottie," a slang term for a sexually attractive person. Other gags are more obvious, such as when women hold two round vegetables before their bosoms, or when a naked man wears a cardboard box that bears the label: "May contain nuts."

Some Christian moviegoers may also object to Rev. Clement Hedges (Nicholas Smith), the cowardly vicar who has his gentle side, but when faced with disappearing plants and a monster on the loose, mainly encourages fear ("By tampering with nature, forcing vegetables to swell beyond their natural size, we have brought judgment on ourselves!") and hate ("Drive out the monstrosity!"). That's his public face; privately he reads Nun Pro Wrestling, and he keeps a palmistry hand statue on his desk. As a caricature of the English clergy, this cleric may be fair game, but between him and the stern Christopher Lee character in Corpse Bride, church types haven't had it easy in recent cartoons.

The Curse of the Were-Rabbit is still a lot of fun. But in moving from innocent little lambs to feisty, naughty bunnies, the Wallace & Gromit crew have tapped into a different sort of humor that is not as "safe" as the family-friendly short films (including 1989's A Grand Day Out and 1992's The Wrong Trousers) that introduced these characters. Ah well, the franchise is now in its teens, so it may as well be full of hormones. How the time flies.

Wallace & Gromit: The Curse of the Were-Rabbit is rated G. There are a number of bawdy innuendos, some of which may fly over children's heads, including: a police officer says the vegetables disappeared because of "arson—someone arsin' around"; Lady Tottington calls herself "Tottie" (British slang for a sexually attractive person); women hold two round vegetables in front of their bosoms; a vicar reads Nun Pro Wrestling; Gromit poses as a sexy she-rabbit to lure the Were-rabbit; the Were-rabbit pinches Gromit's bum; a man jumps around and flaps his hand after being doused with "Pansy Spray" (it's for the flowers); a naked man wears a cardboard box bearing the label "May contain nuts."

Nick Park, whose beloved claymation characters Wallace and Gromit have won Oscars, has finally fulfilled the dreams of fans by bringing the eccentric inventors to the big screen. And sure enough, Wallace & Gromit: The Curse of the Were-Rabbit is earning rave reviews from almost everyone. It's earning higher praise than even Aardman Animation's previous feature-length film, Chicken Run. And sure enough, Park looks like the frontrunner for this year's Best Animated Feature honors at the Academy Awards.

Steven D. Greydanus (Decent Films) raves, "Curse of the Were-Rabbit, along with the more mature and genuinely macabre Corpse Bride, represents a creative triumph of artists working in a form of hand-done animation older and clunkier than cel animation, poseable puppets. It's a giddy, soaring success, and a welcome return for two old friends."

David DiCerto (Catholic News Service) says, "Apart from a few 'naughty' jokes that will probably go over the heads of most children, Wallace & Gromit: The Curse of the Were-Rabbit is recommendable family entertainment."

Tom Neven (Plugged In) calls it "another piece of inspired lunacy. [Park] has given us another film chock-full of groan-inducing puns, wacky wordplay and sight-gags galore. … Park's particular genius is telling terrifically funny stories through stop-motion animation. When you consider that each character is moved in tiny increments to match the film's 24-frames-per-second speed, you marvel all the more at Park's skills."

Mainstream film critics rate the film as one of the year's best.

Andrew Coffin (World) says the film "is delightful from start to finish, introducing some charming new characters to the series and mostly remaining true to the tone of Mr. Park's beloved short films. … The only drawback is the noticeable increase in modestly off-color humor."

Keith Howland (Christian Spotlight) says that "90 minutes does not suit Wallace and Gromit quite as well as 30 minutes. Their earlier adventures were told with considerable thrift, whereas this story seems unnecessarily protracted. Further, in stretching the scenario to feature length, the writers opted to broaden the scope of its humor. … One expects jokes involving double entendre, belching, and underwear from Shrek, not from Wallace and Gromit. … It is as though Wallace and Gromit have lost some of their innocence, and there was never any need for them to lose it."

Warren Kelly (World) says, "There's plenty of excitement and action for the kids, and there are some nods at the parents who bring their kids to see the movie. … If there's a message in this film, it's that violence doesn't always solve problems. Self sacrifice is appreciated. And all good people like fuzzy bunnies. At least, that's what my daughter got out of it."

My own review is up at Looking Closer. Nick Park's film is full of frivolous comical delights, innocent enough for the whole family, but sophisticated enough to make it worthwhile for the most seasoned cinephiles. But fans of the original, shorter Wallace and Gromit films might be a bit disappointed. In the shorts, fast-paced action was balanced with simple, nuanced interplay between the characters. Were-Rabbit pauses occasionally along the way, letting the characters' enchanting personalities glow. But most of the time it's too busy, too eager to amaze and to get us laughing. This stands in sharp contrast to Pixar's films, which are characterized by patient character development and rich storytelling to match their technical wizardry. Here's hoping that if Wallace and Gromit return, they have a stronger, richer storyline.

1 of 4
Wallace and Gromit get ready for their first feature-film adventure!Our heroes are on the move with their Anti-Pesto S.W.A.T. TeamLady Tottington (voiced by Helena Bonham Carter) steals Wallace's heartVictor Quartermaine (Ralph Fiennes) is the sleaze-bag competing for Lady Tottington's attention