After an all-star gymnastics career in college, Maddy Curley, a devout Christian, has landed her first major film role-in Stick It, a new movie about, yep, gymnastics.
by Mark Moring |April 25, 2006

As a star gymnast at the University of North Carolina, Maddy Curley knew she'd never make a living by jumping around on a balance beam or doing flips and twirls on a floor mat.

So instead of eyeing the Olympics, the four-time Academic All-American kept her focus on her first love: Acting. And now she's landed her first gig—as a gymnast, appropriately enough, in Stick It, a new Disney movie opening Friday. The film, targeted mainly at a teen audience, is rated PG-13.

Curley, a devout Christian, plays a supporting role in the film. The leading role belongs to Missy Peregrym, who plays Haley, a 17-year-old former gymnastics star who has big family problems—and a few too many arrests. Forced back into gymnastics to clean up her act, Haley rediscovers her love for the sport—and brings a little sass and rebellion to the game while she's at it.

As Mina, one of Haley's teammates, Curley plays a talented-but-timid gymnast who eventually learns to assert herself, thanks mainly to Haley's energy and influence.

We caught up with Curley recently to discuss the movie, her role, and the challenges of being a young Christian in Hollywood.

Have you always wanted to be an actress? Or did you ever have a goal to be an Olympic gymnast?

Maddy Curley: Well, there's no money in gymnastics. And I definitely wanted to be an actress. When I was younger, I had other goals too, crazy ambitious things like Senator or a Congresswoman. But acting was always at the top.

Tell me about your character in this film?

Curley: I play a girl named Mina, a 16-year-old up-and-coming gymnast. She's the type who would never speak up to her coaches. And then this girl Haley comes in, and she's one of Mina's idols, and she kind of learns how to stand up ... 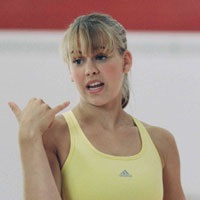