It's no secret that the Rocky movies have, in some sense, mirrored the career of the man who wrote and starred in them all. In the 1970s, Sylvester Stallone was a struggling actor who got his shot at the big time by writing, on spec, a screenplay about a struggling boxer who gets his shot at the big time—starting with the original Rocky, which won an Oscar for Best Picture in 1976. In the 1980s, as Stallone was at the height of his box-office power, Rocky was transformed, quite abruptly, from a hoodlum with a heart of gold to a wealthy celebrity who enjoys his fame and riches but fears that he may have lost his edge. And then, in 1990, as Stallone's star began to fade, Rocky lost his fortune—again, quite abruptly—and retired to the low-income Philadelphia neighborhood where his story had first begun.

Sylvester Stallone as Rocky, coming out of retirement to fight again

And now? Stallone hasn't starred in a major theatrical release in at least five years—unless you count his supporting turn as a bad guy in the last Spy Kids movie in the summer of 2003—and as the newest Rocky movie opens, we learn that Rocky, too, has been living quietly under the radar. His beloved wife Adrian has been dead for four years; his son Rocky Jr. (Milo Ventimiglia) is too busy to visit, thanks to work and his need to get out from under his father's shadow; and Rocky spends his nights running a restaurant and regaling his customers with stories about his time in the ring. On anniversaries, he visits the places where he first wooed Adrian, and he drags her brother Paulie (Burt Young) along for company—much to the frustration of Paulie, who simply has no use for this kind of nostalgia.

In other words, both Stallone and his creation are underdogs again, and the purpose of Rocky Balboa—in another era, the film would have been called Rocky VI—is to show us that they've both still got it. All they ask is that we give them a chance.

Thankfully, the new film rewards our indulgence. Yes, on one level, it does follow the formula that became so predictable over the course of the franchise. (Friends and family trying to talk Rocky out of getting into the ring? Check! Training montage capped by a shot of Rocky running and pumping his fists in the air? Check! Climactic fight sequence? Check!) But the new movie also comes closer to the spirit of the original than most of the other sequels; for one thing, there are no obvious bad guys that need to get their butts whupped this time. When Rocky comes out of retirement and gets back into the ring, he does it for reasons of pride, more than anything else; in a way, he does it to prove to himself, and to others as well, that he's still very much alive.

The set-up is somewhat contrived, as usual. A sports network plays the what-if game and gets a computer to imagine whether Rocky in his prime could have beaten the current heavyweight champ, Mason "The Line" Dixon (Antonio Tarver)—and this simple exercise stirs interest in what a real fight between the two men would be like, even though Rocky is definitely no longer the fighter that he once was. The obstacles that might prevent this fight from taking place are overcome with convenient ease—and of course, the new movie never even mentions the "irreversible" brain damage that forced Rocky to retire 16 years ago—but it all leads to a satisfying climax.

What makes the movie work is the way it focuses on certain characters and how they negotiate that tricky road between pride and humility. Rocky himself is the same good-natured tough guy that he has always been, his modesty and generosity nicely offsetting his obsessive need to prove himself. He strikes up a charming friendship with Marie (Geraldine Hughes), a woman from his past, and her son Steps (James Francis Kelly III). He allows former opponents to eat for free at his restaurant—one of whom, Spider Rico (Pedro Lovell), eventually feels obliged to "earn" the gift that Rocky has given him. And even the dyspeptic Paulie lights up noticeably when he comes into Rocky's orbit, as a member of his ringside team; at a time in Paulie's life when he is down and vulnerable, Rocky lifts his spirits and gives him purpose. 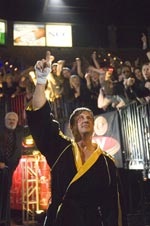 Rocky's always a champ in the hearts of the people

Even Rocky's newest opponent, Dixon, is treated by Rocky himself and by the film as a whole as a person worthy of respect. The first thing we learn about Mason is that boxing fans don't like him, and we can soon see why; he's petulant and easily annoyed, and he is surrounded by greedy managers who care way more about money than about anything meaningful, like his reputation. ("A legacy is what you get when you don't get paid," one of them tells him.) But we get the sense that Mason itches for something deeper, enough so that, when he and Rocky finally meet in the ring, we are concerned for the honor of both men.

There has been much talk lately about Stallone's efforts to promote Rocky Balboa to the religious media, and on some small level, that hype is justified. Most of the Rocky films have, at a minimum, shown our hero praying or crossing himself before the big fight—and interestingly enough, the religious elements have been more pronounced in the earlier and later films, when Rocky was not so distracted by the trappings of money and fame. Rocky prays in the newest film, too, but this time, he does a bit more, as he and Spider read a Bible verse together. It's a nice touch, but nothing to write home about. Then again, it is good to see that Rocky has some sense of the bigger picture, and it's a nice note on which to end the series.

Rocky Balboa is rated PG for boxing violence (lots of punches, but nothing all that bloody or brutal) and some language.

from Film Forum, 12/21/06
Back in 1976, Sylvester Stallone's Rocky won the Oscar for Best Picture. Since then, the sequels have failed to reach that standard, and many other franchises have surpassed them even as they copied Rocky's formula.

But don't count Stallone out. In what is apparently intended to be the final chapter of the franchise, he's brought Rocky back for one more fight. And, strangely enough, the film has been promoted to Christian audiences. Why is that? Christian film critics, who are enjoying the film, have some ideas about that.

Adam R. Holz (Plugged In) says the movie "exceeded my expectations. By a long shot. Not only does this film redeem the series, it tells a compelling story of an older man trying to make sense of a world that has passed him by. Stallone's performance as the aging fighter is easily his best in years."

He concludes, "But what really makes this work is the fact that Rocky Balboa isn't really about Rocky's last fight. It's about a man discovering that he still has something to give, something to live for, even though his best, glory-filled days are behind him." He says it "qualifies as one of the most redemptive films of the year."

Mainstream critics, meanwhile, are rather surprised by how much they're enjoying Rocky's return to the screen.

1 of 4
Sylvester Stallone as Rocky, coming out of retirement to fight againPaulie (Burt Young) is always in Rocky's cornerMason Dixon (Antonio Tarver) meets Rocky in the ringRocky's always a champ in the hearts of the people