Now in his fifth decade of making music, Andrae Crouch reminisces on a career that started in the days of Jesus Music through his brand-new album, Mighty Wind.
Andy Argyrakis|June 5, 2006

Last year marked Andraé Crouch's 40th anniversary of forming The Disciples—his first ensemble of singers—but the innovator, boundary breaker and legend hasn't slowed down a single bit. Though it's been a while since his last solo album, he's kept busy working with other artists as a songwriter, arranger and producer—including work with Elton John, Quincy Jones, Vanessa Williams and Michael Jackson. On top of all that, he regularly mentors new artists and stays plugged in with various church ministries. Yet the time has finally arrived for his much anticipated return to recording, found in the brand new album Mighty Wind. Christian Music Today caught up with Crouch recently to hear about his new CD, early memories of the Jesus Movement, his ability to blur color lines and more..

How does it feel to be officially back in action?

Andraé Crouch: I've heard people refer to certain artists they haven't seen in the marketplace [for awhile] and they sort of think they've moved, packed up from here and gone to Japan or China, but I've still been around! We just haven't been making records. I've been working on a new album, and always felt like I've never gone anywhere. I just took some time to record and get things done the way they needed to get done.

What are the differences writing for yourself versus someone else?

Crouch Actually, there's no difference whatsoever. It's always been difficult for someone to tell me a story. I'm not as blessed as some people, and it's a different thing for me to hear a story and have someone tell me what they want me to write. Usually when someone records my songs, they become an array of tunes I've already written that would fit into a particular style with them. I ... 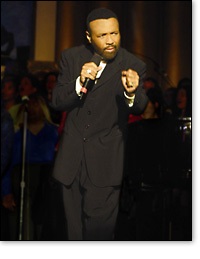