Alejandro Iñ árritu, director of Babel, says his films are about families—parents and children, of course, but also the global family … and the consequences of trying to live without God.
by Jeffrey Overstreet |November 8, 2006

Alejandro González Iñ árritu has a lot of stories to tell. He packs several of them into each film that he makes. In three critically acclaimed features—Amores Perros, 21 Grams, and the latest, Babel—he and screenwriter Guillermo Arriaga have told at least nine, depending on how you unravel his complex tapestries of narrative.

All three films bear the distinct style and perspective of storytellers who are unafraid to portray characters in states of depravity, desperation, and despair. There is a burdensome weight to these pictures, giving us the sense that the world is getting very dark indeed. Hope is not lost, but it only glimmers in the occasional traces of compassion and care.

Born in Mexico City in 1963, Iñ árritu has had quite a colorful journey already. He began his creative career as a radio DJ, then began composing music for films. Studying film in the U.S., he eventually crafted Amores Perros, the feature film that would earn him raves and awards around the world, including a Best Foreign Film nomination at the Oscars, and catapult him into the top tier of directors working today. 21 Grams earned nominations for Benicio Del Toro and Naomi Watts.

And now, Babel may earn him his first Best Picture nomination. Babel features unforgettable performances by Brad Pitt and Cate Blanchett, even as it introduces American audiences to a diverse, international cast. Filmed in Mexico, the U.S., Morocco, and Japan, it carries us around the globe into various crises of violence, loneliness, and communication breakdown. It's almost overwhelming, but we come away thinking about the power of compassion and the need to slow down and pay attention to our neighbors and their needs.

Tags:
None
Posted:
November 8, 2006
More From: by Jeffrey Overstreet 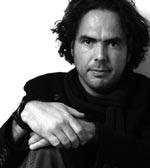