That's how director Darren Aronofsky describes the central theme of his new film The Fountain, the story of a young married couple and their struggles as the wife is dying of cancer.
by Jeffrey Overstreet |November 20, 2006

In Darren Aronofsky's ambitious, unusual science fiction film The Fountain (opening Friday), a husband must come to terms with his wife's mortality. As Tom watches Izzy suffer the debilitating effects of a growing brain tumor, he leads a frantic scientific endeavor to find a cure. But she responds differently, chronicling her feelings in a historical novel about the queen of Spain.

Both their daily reality and the novel reflect humankind's longing for the Tree of Life, the source of eternal life described in Genesis. And their varying responses reveal humankind's tendency to respond to death in fear and panic, rather than seeking a spiritual path to peace.

For Aronofsky, the project was deeply personal, a passion that led him to multiple attempts to get the film made. But he made it, and cast his own true love—Rachel Weisz—in the role of Izzy, opposite Hugh Jackman as Tom. The project is unique in its depiction of a passionate marriage and a spiritual struggle. And it reveals an artist who is deeply dismayed at the direction the world is going, and who wants us to come to a deeper understanding of the ties that bind us, and our responsibility to the world we've been given.

Some filmmakers portray marriage as bondage, but The Fountain shows us an admirable marriage. Tom and Izzy are really in love, they're faithful, and they support each other through hard times.

DarrenAronofsky: We definitely have gotten disconnected from what a relationship between two people can mean. That's because of all the temptations that are out there. Everything's a little all out of whack. But, The Fountain, to me, is a very, very romantic film. Romantic with a big capital "R."

It's about two people who love each other deeply, and yet a ...

Tags:
None
Posted:
November 20, 2006
More From: by Jeffrey Overstreet 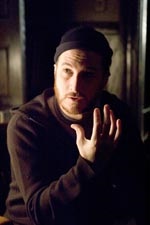