In the end, it wasn't Kryptonite, but rather a speeding bullet that killed Superman. Or actor George Reeves anyway, though from watching Hollwoodland, you get the sense that kids back in 1959 regarded the two men as one and the same. Their invincible hero, the Man of Steel, tragically taken away from them, felled by a gunshot to the head in an act of suicide.

Or was it? What about the other two bullet holes in his bedroom floor, the bruises on his arm, and other inconclusive bits of evidence? Was it the open and shut case that L.A.'s investigators concluded it to be, or is there more to the story?

Reeves' acting career never amounted to very much. After a hopeful start alongside Clark Gable in Gone with the Wind, he was relegated to bit parts and Saturday matinees well into his late thirties. Which might partly explain why he eventually won the lead role in the popular '50s television show The Adventures of Superman—or perhaps it was also because he was sleeping with the wife of one of Hollywood's most powerful studio executives. Either way, it would prove to be his last acting job before his untimely death at 45.

Thus, a straightforward biography doesn't have much story to tell. But screenwriter Paul Bernbaum and director Allen Coulter (making his cinematic debut after working on various HBO dramas) recognize that the circumstances surrounding Reeves' death ironically makes his life more interesting. What would drive a seemingly successful and happy actor to suicide? And if it were murder instead, then who would have reason to kill the man known as Superman?

To examine these angles, Hollywoodland is part bio-pic and part mystery. Stylistically, it's similar to other California crime noirs like Chinatown and L.A. Confidential. ... 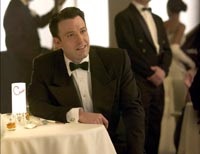