Devoted fans of 1973's The Wicker Man make claims about the film's cinematic greatness, claims which are probably exaggerated—that's what makes them fans. Critics will no doubt massacre this new version, starring Nicolas Cage, but they are probably overly critical of the film's flaws—that's why they're called critics. When it comes down to it, this remake of this oddly chilling curiosity is neither a Big Deal nor a Big Bust. It's just a movie. And that's a real disappointment.

Director Neil LaBute has penned his own adaptation of the intelligent and troubling Anthony Schaffer screenplay, and it's obviously a labor of love. Offered a role in the remake, lead actor Edward Woodward (not to be confused with Ed Wood) politely declined, but remarked that the new script was surprisingly good. So LaBute settles for renaming the missing girl "Rowan Woodward." Nice touch.

Not only the overall arc of the story remains the same—a conventional cop travels to a secluded island to search for a missing child, and comes to suspect that the secretive, cultish residents know more about the girl's fate than they are admitting—but entire scenes are carried straight over into the new film, the dialogue virtually unchanged. The arrival by seaplane and the policeman's bar-pounding lawman-righteous speech at the pub are taken straight from the original, as is the wonderful confrontation with the school-teacher and her classroom full of eerily complicit students. Only it's William Blake on the blackboard rather than quasi-wiccan wisdom: "Toadstone preserves the newly born from the weird woman, the hagstone preserves people from nightmare" is replaced with a so-apt-as-to-be-prophetic passage from "The Marriage Of Heaven And Hell": ... 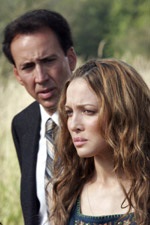