In the book of Exodus, we read about how Moses confronted Pharaoh, who was persecuting the Israelite slaves, and demanded, "Let my people go!" But Pharaoh stubbornly refused, even as the wrath of God brought ten plagues to ravage his land.

There are also ten plagues in The Reaping, Warner Brothers' new horror thriller. But you don't have to suffer through all of them, or wait for a deliverer. You are not a slave to Hollywood's clever marketing campaigns. You don't have to wait for an usher to yell, "Let my people go!" You can get up out of your theater seat and go free at any time. Or, better yet—you can avoid this movie altogether.

As written by Carey W. Hayes and Chad Hayes, The Reaping has an intriguing premise—those famous Old Testament plagues are recurring in Haven, Louisiana. Or are they? Perhaps there is a scientific explanation for all of this.

That's what Katherine Winter (Hilary Swank) proposes. Winter may as well be Indiana Jones' granddaughter—one day, she's lecturing about the scientific explanations behind reportedly paranormal phenomena. (Doesn't your local university have a miracle-debunker?) The next day, she's an adventurer, investigating so-called "miracles" so she can debunk all of this hocus-pocus.

The pattern worked for Indy, but Winter could stand to learn a thing or two about adventuring. She seems strangely compelled to wade deeper and deeper into trouble equipped with little more than fancy scientific jargon. Whether she's headed into a dark attic, a dark cellar, a dark abandoned house, or dark woods, Winter seems averse to using common-sense tools like flashlights. Shouldn't she be wearing more than a flimsy tank top as she deals with boil-covered corpses and blood-polluted rivers? ... 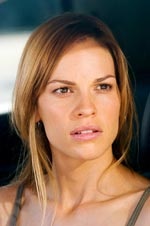