Rod Lurie, director of Resurrecting the Champ, is a West Point grad who emphasizes ethics—especially honesty and integrity—in his movies.
by Brandon Fibbs |August 21, 2007

Rod Lurie graduated from West Point and served four years in the U.S. Army. Perfect background for a filmmaker, right?

For Lurie, the answer is a resounding "yes." His time at the U.S. Military Academy taught him the value of ethics, integrity and honesty—and in choosing to do the right thing even when it's difficult. These ideas permeate his films, including 2000's The Contender and now Resurrecting the Champ, opening in theaters this Friday.

In a recent interview with CT Movies, Lurie spoke of the importance of sticking to one's principles, no matter the cost. Those ideas ring true in Resurrecting the Champ, whose tagline almost says it all: "Based on a true story, that was based on a lie."

The true part—based on a Los Angeles Times Magazine article by J.R. Moehringer—concerns an eager young journalist looking for his big break. When the writer meets a former boxing champ who's now homeless on the streets, he knows he's found his story—but in his eagerness to tell the tale, he neglects one vital journalistic practice: Thorough fact-checking. That's where the lies come into play.

In Resurrecting the Champ, Josh Hartnett plays sportswriter Erik Kernan, and Samuel L. Jackson plays "The Champ," the former boxer now homeless in a performance that is already getting Oscar buzz. It's a story and film not just about honesty and integrity, but about father-son relationships as well.

You have a fascinating personal resume—born in Israel, attended West Point, served as an air defense artillery officer in the Army—what drew you to film from that background?

Rod Lurie Movies, man! In a way I entered that background in order to make movies. When people ask me if they should go to film school, I usually ... 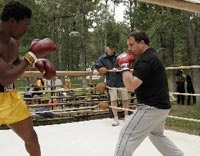