Singer/songwriter Ron Block—who plays guitar and banjo for Alison Krauss and Union Station—reflects on his journey to find identity in Christ instead of his own talent.
Stan Friedman|August 6, 2007

A winner of 13 Grammy Awards for his musicianship and songwriting, Ron Block is an unlikely premier bluegrass guitarist and banjo player. He first was attracted to the art form as a teenager in California, but later brought his own style to Alison Krauss and Union Station, with whom he has been a member since 1991. But his place in the band as well as his sanity were threatened in the mid 1990s, when he lost faith in the talent on which he had built his identity. He reflected on that dark period for our interview, while also discussing his second solo album DoorWay, influenced as much by C.S. Lewis and George MacDonald as by Bill Monroe and Lester Flatt.

How did a kid who grew up in Los Angeles come to love bluegrass?

Ron Block I worked at my dad's rock 'n' roll music store. I had gotten an acoustic guitar in 1975 and played all the time, but then I picked up a banjo and just fell in love with it. I was thrilled with the sound of bluegrass. I also think it was a way to rebel. In the ultimate sense, it was God calling. If I had played rock 'n' roll, the path would have been much different than the one I've been on.

Block I grew up with a low sense of self-worth, and saw God as this distant, kind of stern figure. I was always trying to please him but felt I never measured up. One night as a teen, I was sitting in a car with a friend I was in a band with, and I remember him saying, "Ron, we're not saved by doing; we're saved by trusting God." That was a huge epiphany for me. I went home and it was as if I had a whole new Bible. I began to look at the Bible as promises rather than commands. I learned from Matthew 6 that God would take care of my needs if I put him first.

But my identity was still wrapped ... 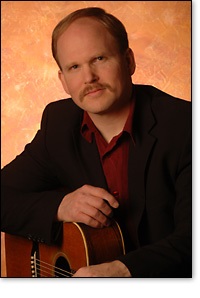