Breach is the third spy film in only a few months to examine the personal costs required to work in the deceitful and dangerous world of espionage. In Casino Royale, The Good Shepherd and now this FBI thriller based on a true story, characters discover the very real need to shut down emotionally, surrender personal relationships and spin webs of deception in order to protect their countries.

Each film asks weighty questions: Is it personally worth it? Do the ends justify the means?

What sets Breach apart from Casino Royale and The Good Shepherd is that a main character answers "no."

Breach is based on the true story of Robert Hanssen (Chris Cooper), the 25-year FBI veteran who was arrested in 2001 for selling U.S. secrets to the Soviet Union and Russia for most of his career. His espionage reportedly cost the U.S. millions in dollars and even more in lives. This is where the film begins—with actual footage of John Ashcroft's press conference about Hanssen's arrest. And then, the film rewinds to tell how it happened.

Hanssen's arrest was the result of the FBI's largest operation until that point—with over 50 agents working the case. In the end, the key player was an unproven 27-year-old up-and-comer, Eric O'Neill (Ryan Phillippe). O'Neill, working under the supervision of Special Agent Kate Burroughs (Laura Linney), posed as Hanssen's clerk to patiently observe Hanssen and secure evidence to catch the traitor in the act.

In realistically capturing the final days of the case, Breach packs good intrigue, tension and peeks at modern spy work. But in terms of plotting and action, it's fairly standard though effective. What truly makes the film is its success as a revealing character study of both O'Neill and Hanssen. Hanssen's ... 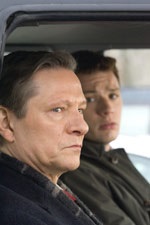