What happens when a random assortment of humans are forced to collectively deal with incredible terror? Do they band together in unflinching patriotism ("United We Stand" style?) or do they cower in fear and turn on each other? This is the question that underlies Stephen King's The Mist.

Based on a Stephen King novella and adapted for the screen by writer/director Frank Darabont (who has some experience with successful King adaptations), The Mist is the story of a small town that becomes shrouded in a mysterious and malevolent fog. The brunt of the film takes place in a claustrophobic grocery store (classic horror film convention) where a band of survivors barricade themselves in and (hopefully) out of harm's way. Some doubters venture outside into the mist and are never heard from again. Some come back in pieces.

The grocery store assortment of townsfolk includes heroic alpha male David (Thomas Jane) and his young son (Nathan Gamble), supermarket manager Ollie (the fantastic Toby Jones), a newcomer to the town (Laurie Holden), and a smattering of other slice-of-life stereotypes (young, old, smart, stupid, brawny, nerdy, etc). The most interesting of these characters is a Bible-toting, fire-and-brimstone spewing shrew named Mrs. Carmody (Marcia Gay Harden)—who provides one of the most hateful and vicious "Christian" characters in recent cinematic history. From the get-go, Mrs. Carmody explains the mist and its apparent monsters in terms of the apocalypse: "It's the end of days! It's death! It's judgment day! Star Wormwood blazes!"

As things go from bad to worse and the body count rises, Mrs. Carmody's vocal pronouncements of a "vengeful, Old Testament God" unleashing his wrath through these "plagues" begins to amass ... 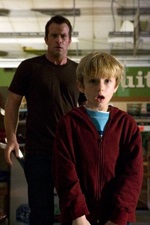