With today's DVD release of Amazing Grace, one of the film's producers says the film's protagonist taught him much about how to change the world.
by Dr. Bob Beltz|November 13, 2007

Editor's note: Bob Beltz, an associate producer forAmazing Grace, is an executive and special adviser at Walden Media, which brought us Charlotte's Web, Bridge to Terabithia, and The Lion, The Witch, and The Wardrobe. Beltz also edited a revised version of William Wilberforce'sReal Christianity, so, for the DVD release of Amazing Grace, we asked Beltz to write about what he's learned from Wilberforce.

February 23, 2007 marked the 200th anniversary of the abolition of the Slave Trade throughout the British Empire. On that day, in 1807, Parliament passed a bill that had been reintroduced nearly every year since 1791 by a young British parliamentarian named William Wilberforce.

Two hundred years to the day from the passage of that bill, the movie Amazing Grace opened in theaters. It was a landmark day for me personally, because over the preceding five years I had been part of the team that developed and produced the film. During those years, I learned some life-changing principles from William Wilberforce.

Wilberforce was a man who made his life count! Without question, he was a person who changed the world, one of few men and women who have had such a significant impact. It's common these days to hear people talk about changing the world, but it is estimated that 99 percent of the people who populate the planet live under conditions created by the other 1 percent. Most of us are not world changers, but Wilberforce was.

One day during the production of the film, I asked myself, "What was it in the life of Wilberforce that made him a world-changer?" I believe that as followers of Jesus Christ, God has chosen each of us to be a part of the 1 percent who make a difference. So how do we do it? How did Wilberforce do it? 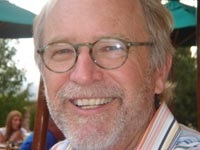