When Isabella Fields El-Ibrahimi (Reese Witherspoon) cannot get answers regarding her Egyptian-born husband Anwar's (Omar Merwally) sudden disappearance, she goes to an old college friend, Alan (Peter Sarsgaard), who now works in a senator's office. Alan deduces that the CIA may have secretly apprehended Anwar on terrorism charges (under the U.S.'s "extraordinary rendition" laws). Before he digs deeper, he asks Isabella if maybe Anwar had any connections, any ghosts of the past, any secrets that he needs to know.

Repeatedly, Isabella tells Alan, "You knew him. He's the same person. You know him."

But, unfortunately, what that fully means about Anwar is completely lost on the audience of Rendition. What does Alan know about Anwar that would make him understand Isabella's defense? What was Anwar like? What is he like now? The viewer doesn't fully know; we just take Isabella's word for it that if we knew him, we'd know he isn't a terrorist. When Alan asks detailed questions like "What mosque does he attend? Does he attend mosque?" no answers are given—only "You know him!"

But we don't. And that's mainly because the film doesn't really present Anwar as a fully developed character. He might as well have been called Accused Terrorist No. 1. He's a character type—not a character. He's not the only one. Witherspoon is cast as Fretting Wife and her story is interweaved with those of Jake Gyllenhaal's Federal Agent Over His Head, Meryl Streep's Heartless Bush Adminstration Witch, and No Nonsense Arab Torturer (Yagil Naor). Few of the film's many characters feel like more than mere set pieces to prove the film's Big Political Point.

And that's the second check against Rendition: It's more political agenda than it is story. ... 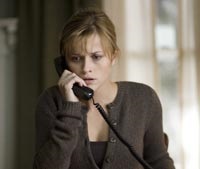