Feast of Love, the latest film from veteran filmmaker Robert Benton (Kramer vs. Kramer, Places in the Heart), is an easily recognized type of drama: the "ensemble cross-section" film. Taking place in a smallish town in Oregon, the film (based on a book by Charles Baxter) unfolds in mini sketches and loosely connected plotlines. In this case, the various threads are woven around the not-so-incendiary theme of love, or "feasting on love."

Like in a buffet, the film offers up plenty of sensuous pleasures, and its characters dwell in the hedonistic mode implied in the title: live for the moment, seize upon desire, and feast on all pleasures while you can. For a film so devoted to a "live in the moment" ethic of pleasure, however, Feast is not a very enjoyable experience. In fact, it's downright dreary.

The film's menu of bite-size characters in half-baked melodramatic scenarios is far less appetizing than it should be. Morgan Freeman anchors the cast, as the friendly neighborhood sage who everyone goes to for advice. As a wine-drinking professor in a happy marriage with Esther (a very weepy Jane Alexander), Freeman is easily the most likable character. Still, it is unfortunate to see a great actor like Freeman in yet another clone role as the wise elder black man who is both the moral compass, narrator, and God-like observer of the troubled lives all around him.

Chief among Freeman's advice-hungry friends is Bradley (Greg Kinnear), a relationship-troubled schmuck who runs a coffeehouse (which conveniently serves as the intersection point of many of the characters and storylines—similar to "Central Perk" in Friends). Early in the film, Bradley's wife (Selma Blair) suddenly falls for an attractive woman on her softball team, ... 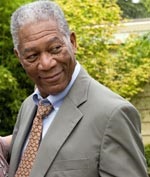