The summer is over, and Christmas is far away, so it must be September: that time of year when, as the Reuters news agency noted last weekend, the studios roll out their "prestige pictures" while dumping their "stale leftovers" on the multiplexes.

The film—which was shot more than two years ago and has apparently been sitting on a shelf somewhere ever since—stars Seann William Scott, best known for playing Stifler in the American Pie movies. Stifler, you may recall, was the rude, crude party boy who was shocked to discover that his mother had bedded one of his classmates. In his newest film, Scott plays John Farley, a nicer and much less abrasive figure who nevertheless finds himself in a similar predicament, when he learns that his widowed mother is dating, and having sex with, the strict, mean, heartless gym teacher whose classes traumatized John when he was just a boy.

The film begins by showing us one of those classes, as Mr. Woodcock (Billy Bob Thornton) berates the boys in his charge. "Take a lap, lose the asthma," is a typically insensitive instruction, and Mr. Woodcock thinks nothing of hitting the boys with basketballs or insulting them the way a drill sergeant rants at his troops when they fail to succeed at the punitive exercises he gives them. It is easy to believe that little John Farley (Kyley Baldridge) would find the experience psychologically scarring.

Fast-forward a couple decades, and John (Scott) has grown up to become a popular motivational speaker and the author of a book that tells people "how to get past your past." He is on a book tour, signing autographs and giving his fans pat feel-good aphorisms like, "All I did was give you the raft. You had ...

Join in on Facebook
Tags:
None
Posted:
September 14, 2007
More From:
Peter T. Chattaway 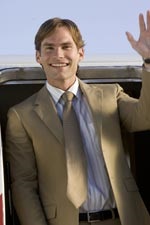