Every vote counts, so they say, but a lot of people, no matter how seriously they take their civic responsibility, probably derive some small comfort from the thought that their own vote probably doesn't make that much of a difference. If the guy you voted for loses, then fine, you can spend the next few years griping about the guy who won, safe in the knowledge that you didn't vote for him anyway. And if the guy you voted for wins, well, it's only because lots and lots of other people voted for him, too—so if you ever come to regret casting your ballot in his direction, you can always shrug and say that everyone else was doing it, too. And since you cast your ballot secretly anyway, no one needs to know that you share any of the blame.

That's the situation that poor, divorced, drunken, working schlub Earnest "Bud" Johnson (Kevin Costner) finds himself in when a handful of errors, mechanical and otherwise, lead to a situation in which an entire presidential election hinges on him, and him alone. Just as the election in 2000 hinged on Florida, so too this election—in an unspecified year—hinges on Bud's home state of New Mexico. And instead of going through weeks of recounts and legal maneuvers, the state has determined, almost instantaneously, that everything hinges on Bud's town of Texico, in a county so small that every single registered voter can be phoned in just a few hours.

What the state authorities find, or so they think, is that Texico is split right down the middle—and that Bud was interrupted in mid-vote when a cleaning lady accidentally pulled the plug on his voting machine. What they don't know is that Bud was drunk and passed out in his truck on the night of the election, and that it was his politically savvy daughter Molly (Madeline Carroll) who snuck into the voting booth with his ballot and tried to cast a vote when no one was looking. (The guy manning the polling station was asleep at the table when she got there, and apparently neither of the parties sent any scrutineers to keep an eye on things. Hey, it's a small town—maybe no one really did think the votes there would make a difference!)

At any rate, since his ballot was registered but the actual vote was not, Bud is told that he may cast his vote again, ten days after the election—and when a local reporter named Kate Madison (Paula Patton) breaks the news that everything hangs on local boy Bud, the two main presidential candidates come to Texico in a frantic, desperate bid to win Bud's vote. Suddenly a blue-collar nobody with no strong convictions has more power over the fate of the world than the most influential politicians of his age—and his utter malleability exposes theirs, as well. 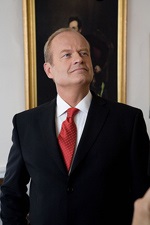 And so Swing Vote gets off to a fun and gently cynical start. Cynical, because both of the candidates are ready to abandon their principles if they think a reversal of their policies is likely to win Bud's vote: the Republican incumbent, Andrew Boone (Kelsey Grammer), comes out in favor of gay marriage and environmental preservation, while the Democrat challenger, Donald Greenleaf (Dennis Hopper), promises to clamp down hard on abortion and illegal immigration. But gentle, because both of the candidates are portrayed as basically nice people who sell their souls reluctantly, only because it's what their campaign managers tell them to do. So while the film does mock the political process, it also allows you to think that the nation will be in basically good hands no matter which man wins the election in the end.

The film aims for balance in other ways, too. For example, it gets real-life celebrities from both sides of the political aisle to play themselves: NASCAR legend Richard Petty shows up as a supporter of Boone, the Republican, while country-music star Willie Nelson urges Bud to vote for Greenleaf, the Democrat. In other ways, though—notably the particular issues it chooses to emphasize, and the way it chooses to emphasize them—the film would seem to skew slightly liberal. But only slightly; like any good politician, the filmmakers have left their characters a fair bit of wriggle room. And it is worth noting that both of the presidential candidates are played by actors who reportedly have ties to the Republican party in real life.

As entertainment, the film starts off on a promising note. Costner is enjoyably goofy as a guy in way over his head, and Carroll, who could easily have come off as a typical, too-smart-for-her-own-good child actor, nicely avoids being too cute or too perky and manages to convey instead some of the sadness that lurks behind Molly's awareness of the fact that she is smarter and more responsible than her dad. Grammer, so famous for his pompous pronouncements on Frasier, has a nicely subtle, graceful moment when Boone makes an important moral choice. And Stanley Tucci and Nathan Lane provide some nice chuckles as the campaign managers.

Things turn increasingly serious, though, as the film moves toward its conclusion.  A late plot twist involving Bud's estranged ex-wife (Mare Winningham) brings an awkwardly gloomy shift in tone to the proceedings, and seems to serve no purpose except to convince us that Bud, for all his failings, really is the better parent for Molly. And as Bud takes his responsibility more and more seriously, the film becomes less and less fun. Near the end, Bud admits that his situation used to be funny, but now it isn't any more. The same, alas, can be said of the movie as a whole.

Swing Vote is rated PG-13 for language (about a dozen four-letter words and about a dozen uses of God's or Jesus' name in vain). Most of the profanity is spoken by Bud, who is reprimanded at least twice for his language—once by his daughter, who says, "You've got to stop using Jesus' name as a cuss word all the time. He's a billion people's savior, you know." Bud also drinks a lot, which gets him into trouble, but it's handled with a light, comic touch, and he eventually learns to put the beer aside. The film is a political satire, so it also makes irreverent references to the politicization of issues like abortion, gay marriage, intelligent design and so on.