The Curious Case of Benjamin Button is an epic, not of scale, but of time. It is the story of an infant born suffering the infirmities of old age who lives his life in reverse, growing younger with each passing year until he dies in infancy. The film is a charmed, enchanted fable steeped in melancholy and wistful serenity. And it is an artistic and narrative triumph, which, while colder and more emotionally remote than necessary, embodies one of the most beautiful love stories set to screen in a very long time. Benjamin Button is not the finest film of the year, but it gets awfully close.

The film is based on F. Scott Fitzgerald's 1921 short story. Screenwriter Eric Roth, the latest in a long line of scribes to take a whack at the material, borrows the famed American author's premise but creates a richer, lusher narrative than the short story could ever convey. Roth sets the film in New Orleans, a city of Old South gentility and infinite color and spice, bookending it between World War I and Hurricane Katrina.

Benjamin (Brad Pitt) loses his mother in childbirth, and his father, a button manufacturer (Jason Flemying) is so horrified by the child's ravaged appearance that he abandons him on the steps of a rest home, where he is discovered by Queenie (Taraji P. Henson), a loving black employee. Queenie raises Benjamin as her own, among the elderly patrons. Even as a toddler, Benjamin fits right in—stooped, balding, bespeckled, hard of hearing and confined to a wheelchair. The doctor claims Benjamin has one foot in the grave already, but instead of dying, Benjamin grows taller, stronger … and younger.

When the pre-pubescent (though he looks like a man in his 70s) Benjamin meets the granddaughter of one of the residents, the red-haired beauty named Daisy, he is instantly smitten. If Daisy minds the attention paid her by the shriveled, little man, she doesn't show it. Perhaps she senses his youthfulness. As the years pass, Benjamin and Daisy retain a special connection. Daisy is Benjamin's only anchor in an ever-changing world viewed in reverse.

As Benjamin, who is beginning to notice changes to his body, grows younger, he begins to sample the delights of the outside world. He takes a job with a hard-drinking Irish tugboat captain (Jared Harris) who introduces his innocent-in-the-ways-of-the-world employee to the pleasures of drink and the flesh. Benjamin's travels take him to Russia, where he has an affair with a British diplomat's wife (Tilda Swinton), a relationship from which he learns about both love and lust.

As Benjamin ages, he gets younger

But Benjamin's heart is still with Daisy, now an up-and-coming, headstrong ballet dancer in New York City, whose selfishness, bohemian lifestyle and unabashed sensuality take him aback. No matter how Benjamin pursues his childhood crush, he is rebuffed at every turn. Only after Daisy suffers a terrible tragedy does her perspective realign—and does she see Benjamin for the man he really is.

Much of Benjamin Button's allure is its reliance on precise calculations to ensure Benjamin and Daisy come together at just the right time. They can meet in the middle only once. More than just timing, however, Benjamin and Daisy's romance throbs an ephemeral poignancy at once ethereal and tragic—physically, the lovers are headed in opposite directions. As Benjamin grows ever younger, Daisy will become an old woman, and at some point he will catch up to the young daughter their lovemaking produces. The question they are forced to ask is, what form will their love take then?

This omnipresent impermanence informs every frame of the film, which is elegiac and blisteringly aware of human mortality. For Benjamin, death is a constant companion, from the retirement home to the battlefields of Europe. Like the dirge of science fiction's immortals, Benjamin's inverted life invites profound loneliness. It is a bittersweet pill he must swallow. The transitive nature of life and love and the need to embrace it with gusto when it is at last within our grasp is one of Benjamin Button's most abiding thematic elements. 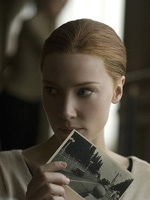 The performances in the film are uniformity tremendous. Pitt and Blanchett are as compelling as ever. He gives a performance of subtlety and gentle sympathy, she one of fire and zest. But the true accolades belong to supporting actress Taraji P. Henson as Benjamin's surrogate mother. Her Queenie is equal parts ferocious lover and dominating matriarch. Her gentle, grace-filled spirit—fired by a rowdy, but authentic Pentecostal faith—is exactly the salvation the young Benjamin needs not only to survive, but to be healthy enough to deal with the unique challenges of his circumstances.

This is the third collaboration between director Fincher and actor Pitt (the previous outings being Se7en and Fight Club). The two have done exceptionally well by each other. The latter's trust in the former's artistic and philosophical fitness is well placed, even when the material veers far off course from the director's previous work, as this does. Benjamin Button is the work of a director of brazen confidence and limitless imagination.

Scene after scene is stitched together with breathtaking beauty and composition. Shot mostly in deep focus to draw the eye to a surplus of detail, director Fincher and lenser Claudio Miranda's painterly cinematography takes on a magical, surreal, dreamlike imagery. Alexandre Desplat's score is the perfect compliment to the images it supports, exquisite and unobtrusive.

Daisy tends to the young (but very old) Benjamin

Benjamin Button represents something new in the hybridization of computer effects and cinematic storytelling—technology placed completely in the service of story and character, instead of the other way around. We are dazzled by the collaboration of old-fashion make-up effects and computer wizardry (Pitt's head was placed on other actors' bodies during the course of the character's life). When the contemporary Pitt finally strides onscreen, after more than an hour buried beneath make-up, he is like an Adonis, eliciting gasps and sheepish giggles from the audience. As he continues to age backward, he is digitally airbrushed to look half as old as his real-life 45 years.

Yet this is not a perfect film. Though haunting, it is uneven, and though engrossing, it holds the viewer at an unfortunate emotional arm's length. The picture lacks a certain warmth. It is as if, in an effort to avoid maudlin sentimentality, the filmmakers went too far, retreating to a point so remote that the audience will struggle to find the emotional touchstones a film of lesser and more obvious sappiness would garishly provide. Though a substantial charge, it seems paltry compared to the sum of the film's parts, which are strong enough to overcome even this hurdle.

In his song, "Start with the Ending," folk crooner David Wilcox laments that life's best comes at the beginning when we do not have the maturity to consciously enjoy it, while the worst part arrives at the end when we can feel it with all the sharp keenness of experience. If only we could "start with the ending, get it out of the way," he sings. The metaphor is peculiarly haunting. We may not live our lives backward, but Benjamin's story—a whimsical yearning for love and connection, a desire to hold onto that which is necessarily transitory, an acceptance that we are not in control but guided by forces beyond ourselves—is acutely universal.

Benjamin Button is rated PG-13 for brief war violence, sexual content, language and smoking. The violence is brief and gore-free. The sexual content includes short-lived scenes of nudity that are tasteful and shot from a great distance, obscuring details. The lead character learns the "ways of the world" and from visits to a brothel and an affair with a married woman, though the actual sexual encounters always occur off camera. The film's language is relatively moderate.

1 of 4
Taraji P. Henson as Queenie, Brad Pitt as BenjaminAs Benjamin ages, he gets youngerCate Blanchett as DaisyDaisy tends to the young (but very old) Benjamin