If Caramel were a Hollywood big-studio comedy, instead of a Lebanese comedy set in Beirut, it would come with a PG-13 rating rather than a PG, and it would be peppered with brassy sex-related dialogue and class/race/gender-baiting humor.

The story could still be centered on a beauty salon as the hub of activity in the lives of a mostly female ensemble cast, although plot needs would probably require some creaky, contrived crisis such as a threat to the salon's future. One of the characters might still learn a hard lesson about getting involved with the wrong man, but "the wrong man" would be a generic creep rather than, say, a married man.

Instead of Muslims and Christians, the social mix would be largely black and white—and characters would discuss this constantly, with little epiphanies of racial enlightenment along the way (hopefully for members of both groups, if the filmmakers could manage it). There would also be a more or less binary division of good characters and bad characters, with slimy men and snobby women in the latter group.

No one would smoke, religion would be invisible, and every plotline would be neatly tied up by the film's end.

All of this wouldn't necessarily make it a bad movie, for example, if it starred Queen Latifah and was called Beauty Shop. But if there's a reason to see Lebanese actress–director Nadine Labaki's Caramel, a substantial part of that reason is the film's Middle-eastern cultural milieu, providing more than just exotic flavor.

As the name implies, Caramel is a gooey, insubstantial confection, often sweet, occasionally cloying, sometimes sticky—in many respects about on a par with the likes of Beauty Shop. The humor is broad, characters stereotypical, the situations formulaic. ...

Join in on Facebook
Tags:
None
Posted:
February 1, 2008
More From:
Steven D. Greydanus 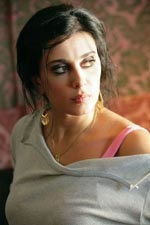