Editor's note: We wanted someone in the target audience to review this film, so we asked Rachel Groters, a high school junior and a freelance writer for Ignite Your Faith magazine, to be our guest critic. Rachel isn't all that big a fan of Hannah Montana, but Rachel's 10-year-old sister had definitely caught Montana Madness, and accompanied her big sis to the screening for a better perspective on the show.

When I saw commercials for this movie, I could take it or leave it. Part of me wondered why Disney would even make a movie of a concert. Wouldn't it be a letdown from the real thing? But then I learned that this 3-D production—which was advertised to be in theaters for one week only—had earned about $18 million in pre-sold tickets, and the few tickets left were selling out fast! I had to find out what all the fuss was about. (After the movie earned $29 million and landed No. 1 at the box office for the weekend, Disney decided to extend its one-week run and let theaters play it as long as they like.)

Turns out that the concert movie was made so fans could enjoy Miley Cyrus's Best of Both Worlds concert without paying an arm and a leg to do so. Last fall, scalpers and brokers got to the concert tour tickets first, then sold them at ridiculously inflated prices. Some tickets were scalped for $1,000 or more! Tickets for the concert movie cost $15, a price some may deem expensive, but pretty cheap in comparison.

When I went online to buy tickets (one for me and one for my ten-year-old little sis, who loves Hannah Montana), everything was sold out except for a Saturday show at 8:15 a.m. (So much for sleeping late!) And when we got there, the theater was so packed that my sister and I had to sit in the second row from ... 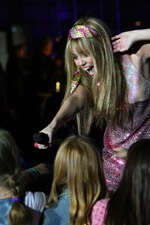