Had enough William Wilberforce yet?

A year ago, February 23, 2007, marked the 200th anniversary of the short Parliamentarian's tall triumph, with the passage of a bill banning the slave trade. That same day, the film Amazing Grace released to theaters, and there has been no shortage of Wilberforce-ian resources in the past year.

What has been missing is that middle-ground vehicle: the public television documentary. A biopic like Amazing Grace is an excellent medium to give audiences access to the emotions of great people and the most dramatic moments of their history. That particular film allowed Ioann Gruffud to stretch his acting powers beyond the limits of Reed Richards/Mr. Fantastic and show what he could do without special effects. But such films almost demand that the filmmakers play down the complexity of the history and rearrange the details in order to maximize the drama.

For those not yet ready to invest their time in reading a full-length biography, an hour-long documentary, airing throughout February on public television, is just the right bridge to better understanding.

The Better Hour: The Legacy of William Wilberforce does well what television documentaries do. It presents the basic facts of Wilberforce's dramatic life in a calm and orderly fashion, illustrates them with historical images, fleshes out the story with interviews with experts, and grounds it with a basso profundo narration (provided by Avery Brooks, Star Trek: Deep Space Nine's Captain Benjamin Sisko).

John Pollock is one of the biographers interviewed

The interviews feature the authors of popular Wilberforce biographies—Kevin Belmonte, Eric Metaxas, John Pollock—and other founts of Wilberforce lore, including Rowan Williams, the archbishop of Canterbury and David Isherwood, rector of the church in Clapham where Wilberforce and his friends found spiritual sustenance.

Wilberforce's network of friends illustrates the complexity of his story. When people speak reverently of Wilberforce's legendary persistence, they create an image of a solitary hero standing against insuperable odds. But WW's perseverance and his multitude of other achievements were due in large part to his circle of intimates. The Better Hour points out his particular talent was for networking, an ability commonly found in effective politicians. Wilberforce's theater was the House of Commons, where he provided leadership to a group of about 30 members. There he acted his very public part in the drama of suppressing the slave trade. His friends were no less gifted, but many displayed their talents on other stages: Hannah More, the gifted playwright and poet, being a prime example.

The Wilberforce story is also complicated by the vast array of projects the man undertook. According to The Better Hour, Wilberforce was involved in founding or funding more than 60 organizations for the betterment of society. These included the Society for the Prevention of Cruelty to Animals (which helps to explain why there were rabbits hopping freely about the Wilberforce home in Amazing Grace). Other efforts included the Bettering Society (for the poor), the National Gallery, and financial sponsorship of Edward Jenner's research into small pox inoculations.

Yet Wilberforce did not throw himself at causes indiscriminately. Rather, he had two great goals. Here is Wilberforce's vision, which The Better Hour calls "one of the greatest personal mission statements of all time": "God Almighty has placed before me two great objects: The suppression of the slave trade and the reformation of manners." 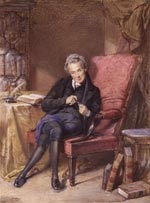 An old painting of Wilberforce

The goal of both the suppression of the slave trade and the reformation of manners was "national righteousness." That phrase appears at the center of a monument (glimpsed briefly in The Better Hour) at Holy Trinity Church in Clapham where the Wilberforce circle worshiped. National righteousness has a quaint sound. But before our present pluralistic age, it was possible to think in such terms, and to appeal as Abraham Lincoln did to the idea of a national character ("the angels of our better nature"). Wilberforce and his friends achieved many of their goals precisely by appealing to Britons' sense of their national character. Surely many of the worst features of their society were beneath them.

Contemporary historians have argued that this appeal blinded Britain to the excesses perpetrated under its colonial aegis and slowed further reform. (We British are certainly too noble be exploiting the natives.) But without that sense of character, little reform would have happened at all.

Likewise, little reform would have happened without faith in God. The Better Hour makes this clear in many ways, from the role faith played in launching Wilberforce into the long struggle, to the supportive role it played for him and his network of friends, to the sustaining power of faith for the slaves themselves. This is one story in which religion—Christian faith—plays a natural and positive role throughout.

Check your local listings for details, or find broadcast info here or here.