Bob Dylan tauntingly sang those lyrics in the 1965 song, "Ballad of a Thin Man," but they could also be said to represent M. Night Shyamalan's attitude toward the audience in his latest suspense-thriller, The Happening. Something is happening in the film, that much we know (and the line is reiterated half a dozen times in case we forget); but what exactly is happening remains a mostly unanswered mystery, even by film's end. And this turns out to be both surprisingly compelling and endlessly frustrating.

Mark Wahlberg and Zooey Deschanel as a married couple

It's definitely a scary thing—to not have answers. And for Shyamalan, it's a bold step. Up till now his films have all been explainable, even if they've been unbelievable. His "gotcha!" endings have tended to reframe his films in more rational constructs—making sense of the various webs of uncertainty, spooks, and phantasmagorias that provide the tension and thrill of the first two acts. At the end of The Sixth Sense, the audience reinterprets the meaning of the film after the big Bruce-Willis-is-dead reveal ("oh it all makes sense now"), and the universe is nice and tidy and understood. Same goes for Unbreakable, Signs, and The Village.

But in The Happening, there is no such tidy denouement. The film becomes less and less comprehensible as it goes along, and the audience—expecting a patented M. Night ending—is cruelly left with no answers, explanation, or narrative closure.

Of course, there are implied answers, and they have to do with some sort of "attack of an angry environment" freak-eco-phenomenon. Here's the setup: people in the U.S. northeast (starting in New York's Central Park) begin to kill themselves en masse, apparently because some self-preservation neuron isn't firing correctly within their brains. The film opens with a bang (literally), with some truly disturbing scenes of people strolling off of high-rise buildings to their deaths. The images bring back horrible 9/11 memories, as does the generally surreal "is this really happening?" mood of the disaster film. Indeed, the first response is predictable: this must be some malicious bio/chemical terrorist attack (only in America would suicides be blamed on terrorists). However, this theory is soon discounted, and, well, for most of the rest of the film we don't really have a clue why this "event" is happening the way that it is. Is nature somehow rebelling against the humans who have so long abused it?

People are killing themselves, but no one knows why

Our protagonist, Elliot (Mark Wahlberg), works hard for the film's ninety minutes to figure out the cataclysm's cause. As he and his wife (Zooey Deschanel) and their friend's young daughter (Ashlyn Sanchez) try to outrun and survive the increasingly dire crisis, Elliot stares at the trees and grasses and wonders what they are plotting next. He's a high school science teacher with a perplexingly ambivalent perspective on science. On one hand he is a hyper-rationalist, thinking in numbers and theorems and racking his brain for scientific answers. But on the other hand he is a supernaturalist/postmodernist, telling his students that "science will come up with some reason to put in the books, but in the end it'll be just a theory. We will fail to acknowledge that there are forces at work beyond our understanding."

It would be easy to make The Happening a completely materialist, earth-bound film about global-warming-gone-berserk. But Shyamalan—as per usual—leaves room for some sort of otherworldly explanation. Can science really explain something as strange as this apocalyptic "happening" (which, incidentally, only happens in that one section of the country)? I don't think so. It's almost as if Shyamalan is jumping into the ring with the whole faith vs. reason bout. He throws punches for both sides, never taking either completely down.

Aside from the whole faith vs. reason motif, other typical Shyamalan themes dot the landscape of this film. Many of his movies seem to be about the triumph of love over fear, of trust over doubt. Whether it is Mel Gibson in Signs seeing God's plan even amid his faithless skepticism, or Bruce Willis getting things right at home before he can be truly heroic in Unbreakable, Shyamalan seems convinced that most horrors in life can be ameliorated if only we love and trust one another. Unfortunately these themes are only briefly touched upon in The Happening, which, more often than not, trades interpersonal drama for scary violence and technical panache (and indeed, the film is beautifully shot, edited, and scored).

As you may have noticed from the aggressive marketing campaign, this is Shyamalan's first R-rated film. And he is not joking. Gone are the cutesy thrills of Signs or the bloodless scares of Unbreakable. The Happening finds Shyamalan relishing the cinematic affinity for the macabre. Unless you routinely watch Saw or Hostel-type films, The Happening will have you wincing and covering your eyes in dozens of spots. People kill themselves in creatively gruesome ways: by gun, knife, needlepoint, glass shard, lawnmower, hanging, car crash, and so on. All the deaths are suicides (if you can call them that) up until a jarring scene in which we see some children (yes, children) get killed by shotgun to the head. Clearly this is not M. Night's "bedtime story" sequel to Lady in the Water. 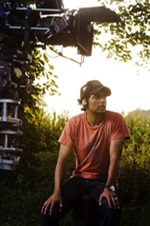 Shyamalan ramps up the horror, but loses some of his magic

For jumpy scares and overall eeriness, The Happening succeeds. Its failures lie in character, dialogue, and acting. Shyamalan has typically been known as a solid actor's director, but this film's two leads deliver truly baffling performances. Wahlberg can be really good (The Departed), but here he is mostly a one-note, puppy-dog-eyed bore. Deschanel is also a good actress (All the Real Girls), but gets (and gives) nearly nothing from this role. On the whole, the acting and dialogue are just very awkward, almost goofy. It is a tonally confused film—sometimes sad, sometimes, funny, sometimes apathetic. At times this adds to the aura of an off-kilter, unexplained universe; but most of the time it is just laughably bizarre.

It's frustrating to see such great talent and a compelling concept (unexplained mass suicides) add up to so little emotional or thematic weight. Still, I found the film rather intriguing—even a little thought provoking, not because it (possibly) portends a worst-case-scenario result of global warming, but because it so cavalierly eschews rational explanation. Something about the film's odd ignorance of its own interior logic rings very true in this world where so much is talked about but so little understood. With all the talking heads and the Internet's wiki-run collective intelligence, we still come up short (perhaps shorter than ever) on life's big questions.

The Happening is rated R for violent and disturbing images. There are numerous very graphic and disturbing death scenes, almost all involving zombie-like suicide. Perhaps the most disturbing scene is not suicide, however, but the intentional killing of two junior high-aged boys who we see get shot at point-blank range by a shotgun. These shocking scenes (and the willingness to kill off main characters) make the film hard to watch at times, and certainly inappropriate for younger audiences. Take the R rating seriously.

1 of 4
Mark Wahlberg and Zooey Deschanel as a married couplePeople are killing themselves, but no one knows whyElliot, Alma, and Jess (Ashlyn Sanchez) take refugeShyamalan ramps up the horror, but loses some of his magic