Recent attempts to tackle the Middle East on film have been, shall we say, less than successful, certainly in box-office terms. Moviegoers didn't seem to mind watching soldiers run around the desert in an overpriced popcorn movie like Transformers, but the moment things turned serious or dramatic, as they did in such very topical films as Rendition, Stop Loss and Lions for Lambs, audiences stayed away in droves.

So now filmmakers are trying a different approach: comedy. From Morgan Spurlock's documentary Where in the World Is Osama Bin Laden?, which didn't make much of an impression, to the stoner sequel Harold & Kumar Escape from Guantanamo Bay, which earned more than twice as much as the first Harold & Kumar film did, the studios are taking a page from Jon Stewart and Stephen Colbert and hoping that war-weary audiences will at least be ready to laugh at the world's problems.

Enter You Don't Mess with the Zohan, which stars Adam Sandler as a sort of "superheroic" Israeli counter-terrorism agent whose ridiculously over-the-top skills—punching through walls, catching bullets in his nose, doing push-ups with nothing more than his feet touching the ground, and so on—are more cartoonish than anything else. The funny thing is, Zohan is sick of fighting Palestinians and wants to quit it all so that he can be a hairdresser. That's right, a hairdresser. And he even fakes his death—or, rather, allows his fellow Israelis to think he has been killed—so that he can run away to America and get a job in a hair salon, where it turns out he has an irresistible sexual appeal to the older female clientele.

Veering from something as serious as the Middle East to something as relatively frivolous as hairstyling and promiscuous ... 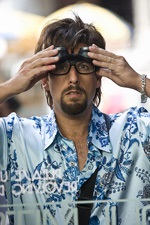