Miss Guinevere Pettigrew does have quite a day. It begins on a blustery London morning in 1939, as Miss Pettigrew awakens on a bench in a London train station. She had lost her job as a governess the day before, and no job prospects are in sight. She gets a meal in a soup-line but it is knocked out of her hands; she collides with a stranger, and her suitcase spills across the sidewalk. With nothing left to lose, Miss Pettigrew forms the bold plan of trying to pass herself off as the applicant sent by an employment agency to be social secretary to nightclub singer and social luminary Delysia LaFosse. (The film is based on a 1938 novel which was reissued in England in 2000, making the author, Winifred Watson, a minor celebrity at 94.) 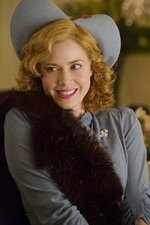 But when Pettigrew arrives at the luxurious apartment, she finds Delysia distraught because Phil won't get out of bed. Pettigrew assures her that she has long experience with recalcitrant boys, and marches into the bedroom delivering a command to get up at once—then is surprised to find that Phil is in his twenties, and stark naked. Delysia is desperate to get Phil out of sight because her official lover, Nick, owner of the luxurious apartment as well as the nightclub where she sings, is on his way home. This farce-like situation demands from Miss Pettigrew dexterity, duplicity, and extremely quick thinking (when Nick confronts the two women with a cigar in an ashtray, Miss Pettigrew coolly lights it and starts puffing away). When the coast is finally clear, Delysia begs Miss Pettigrew to continue in the job. Miss Pettigrew agrees, but with some reservations; she notes that Delysia's life appears to be "fraught with moral complexity."

Miss Pettigrew is a wonderful character, and Frances McDormand is perfect in the part. If you can't place the name, you'll place the face: she was the pregnant police officer in Fargo (1996), who pursued a grisly murder case with good-natured, unflappable perseverance. (McDormand won an Oscar for that role, and has had 3 other Oscar nominations as well as winning dozens of other awards.) In portraying Miss Pettigrew she wisely avoids prissiness, disapproval, or a Poppins-like impenetrable shell. You could even say that she avoids comedy, though this is a film with an abundance of comic moments. The laugh lines belong to others; Miss Pettigrew just keeps going through the day doing what must be done, occasionally registering surprise but soldiering on, with winning resourcefulness and creativity. She is an utterly satisfying character, and she's portrayed by one of our best actresses.

So what's the down side? It's that Miss Pettigrew is the only character in the movie who has more than two dimensions. Amy Adams' Delysia is so silly and shallow that it's hard to care what happens to her, or why three lovers are fighting for her inch-deep heart. In contrast to McDormand's restraint, Adams skitters around, exclaiming "Jeepers!" and flapping pink silk sleeves trimmed with marabou. Amy Adams can be a better actress than this, so this fumble is due either the direction or to flaws in the part itself. The result is something like Who Framed Roger Rabbit?—Miss Pettigrew is a real person, and Delysia is a toon.

We could describe Delysia as a stereotype, but she doesn't even embody the stereotype satisfactorily. There's the kind of curvaceous movie blonde who's strong-willed and quick with a snappy comeback (Jean Harlow, Judy Holliday), and there's the kind who's wistful, childlike, and somehow innocent (Marilyn Monroe). Delysia is neither. She's a hearty all-American girl who's both stupid and crass. As Delysia and Miss Pettigrew pass a shop window they notice that the female mannequins are wearing red dresses and gas masks; a new war is brewing. Miss Pettigrew, old enough to remember the previous World War, comments, "That's frightening." Delysia agrees: "Yes. Capped sleeves."

Lee Pace as Michael, the piano player in love with Delysia

Will Delysia remain true, in her fashion, to powerful, wealthy Nick? Or will she continue to dawdle with two-timing Phil, who might give her the lead in an important play? Or will she sail at dawn with Mike, the poor-but-honest piano player who truly loves her, and who wants to take her to a new life performing in New York? Do you want me to tell you, or do you want to be surprised? Miss Pettigrew, whom we've so come to savor, is reduced at one point to saying this line: "You have lost a man who loves you for what you are, rather than what you pretend to be."

There's plenty more, all following a general rule that the visuals are ravishing (pastries! hats! burnished-gold walls!) and the characters are boring. (An exception can be made for tiny, dark-haired, hard-edged Shirley Henderson as Edythe Dubarry, who, though tense and scheming, employs a voice like Alvin the Chipmunk). It's delightful that Miss Pettigrew finds love too, but this plot development arrives with so little support—we may love her, but he barely knows her—that it feels like we're in Toon Town again.

There's one recurring bit in Miss Pettigrew's story that's well used: she's hungry. Over and over during the chaotic day she almost gets a chance to eat something, then is foiled again. But there comes a moment when Delysia and Edythe are treating her to a spa makeover, and Miss Pettigrew is reclining in a white facial masque with cucumber slices over her eyes. When she's alone she lifts the cucumbers, glances left and right, and then slips them into her mouth. As she chews, she develops a radiant smile. It's a delicious moment, and I wish Miss Pettigrew had had more of them.

Miss Pettigrew Lives for a Day is rated PG-13 for some partial nudity and innuendo. There is rear male nudity, and Amy Adams appears in small amounts of drapery. There is a lingerie fashion show. No bad language, but lots of double-entendres in a context of accepted premarital sex.

1 of 3
Amy Adams as Delysia LaFosseFrances McDormand as Guinevere PettigrewLee Pace as Michael, the piano player in love with Delysia