A couple of old friends—"one a Christian, one not—discuss their disparate views on life in the thought-provoking new film, Purple State of Mind.
by Brandon Fibbs|March 18, 2008

You know the adage about never discussing religion, politics or sex in polite company? Craig Detweiler and John Marks never got that memo.

To understand where Detweiler, a filmmaker and professor at Fuller Theological Seminary, and Marks, a journalist, author and former 60 Minutes producer, are coming from, we must first go back to 1982 when the two roomed together at Davidson College.

It was Detweiler's first year as a Christian. It was Marks' last.

Twenty-five years later, Marks wrote a book about leaving his faith behind, Reasons to Believe. His first interviewee was his old college roommate. Similarly inspired, Detweiler decided to film their conversations, four in all, over the course of a year. Those sessions became the narrative thread for Purple State of Mind, a candid, thorny and relentlessly funny dialogue between two men who are just as unyielding in their divergent principles as they are the critical importance of their friendship.

Detweiler, reflecting the Hollywood styles where he lives, shows up in hip suits and a warm, radiant smile, speaking most often in colors and shades, an artist most comfortable with the language of beauty and emotions. Marks always seems to be dressed down, confronting each issue like the journalist he is, dissecting facts and figures with the burnished instruments of logic and reason.

Detweiler and Marks see America as a nation of speechmakers. More often than not, they contend, all we ever do is stand across a gulf and shout at one another, hurling salvo after salvo in a culture war that has left countless dead and wounded on both sides. Detweiler and Marks yearn for the day when the culture war negotiates a truce and embarks instead on a legitimate conversation that allows people with divergent views to learn from each other.

They don't pretend it's going to be easy. While Detweiler and Marks see the film as "a model for what's possible in a world that's becoming a shooting match," their conversations are infused with very real, often very raw emotions. Conversation does not preclude conviction. But it does necessitate empathy. There are times that both men appear to be working out their salvation (or lack thereof) with the utmost fear and trembling.

Though the film's title—pointing to an ideal in which red and blue state values are fused—would indicate that politics is the prime mover of the debate, it acts more as a metaphor for a greater conversation in which men who occupy two separate worlds come together to find common ground.

Detweiler and Marks begin politely enough, delving into their shared pasts, their mutual distaste of politicized religion, the seasons abroad that altered their established polarities, the tragedies still raw enough to coax tears, the families that fuel them, and the disagreements that fundamentally separate their worldviews.

As a person of faith, Detweiler is deeply disturbed that Christians are known more for what they are against than what they are for. He is baffled that his Savior, a friend of the outcast, a defender of the defenseless, and a champion of the downtrodden, could have been perverted into a standard-bearer for judgmentalism, hypocrisy and hate. "This is the tension I live with," he admits. "How do I own my own people who so make me cringe on a regular basis."

The murder of Matthew Shepard, the gay college student whose brutal slaying was praised by some claiming the name of Christ, was the moment at which Detweiler withdrew from the culture war. "Call me crazy. Call me chicken. Call me 'liberal,' 'communist' or 'gay,'" he says, "but please, do not call me Christian."

Detweiler is continually shrugging off traditional labels. Weighed down with cultural detritus and centuries of transgressions done in God's name, Detweiler prefers the simpler "follower of Christ." He regularly distills Christianity to its fundamentals, stripping away layer after layer of what is said to be essential until he gets to the compressed core.

"I am desperately trying to separate Jesus from what people have been done in his name. Everything I read about Jesus indicates that the people he had the biggest problems with were the most sincere defenders of God. So when I read the Bible, who's in danger of Hell? Me."

For Marks, it was something Detweiler told him in their dorm room all those years ago that cracked the structural integrity of his faith: "God doesn't like artists because they ask too many questions." While Detweiler is the first to balk at the comment (the irony being that he now spends his life convincing Christian artists to ask the hard questions), it led to Marks making the resolution that if it came down to God or the truth art represents, he was siding with art.

Marks's spiritual egress was measured and methodical. He left the faith long before he left God. It was not a backsliding binge, but a slow, fully cognizant retreat. He sincerely wanted to believe, but found he simply could not. Some of Marks's issues are hardly new, though that makes them no less reconcilable or comprehensible. 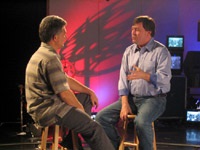 The friends at one of the taping sessions

Marks sees the Bible as a set of blinders, not binoculars. For him, the Bible acts as a barrier, cutting him off from Detweiler, and the Christian from true contact with suffering humanity. He views God as someone who "murdered his own son to make a point" and authored a book that "promises a mass murder of the kind that Charles Manson could only dream of."

For Marks, embracing hell, should it exist, is a moral choice. When asked about his reaction to the judgment seat, he says, "Why in hell should I allow you, who have been the head of a church that has persecuted and killed untold numbers of people, make me answer that question? The only moral choice I have, based upon what your son taught, is to say no, I will not believe. You, the God of this story, do not have the right to ask that question of me."

Marks's vitriol is not based on liberal texts or atheist playbooks. While working as a reporter in the Balkans, he witnessed firsthand the atrocities of which humankind is capable. He saw with his own eyes a situation in which a religious war of words became a war of all-too-real bullets and bombs.

"If you can tell me there is a God who presides over some meaning there, I would have to say I don't give a crap. Because if that God exists, I am in permanent contention with him."

Detweiler possesses enough epistemological humility to know that he doesn't have all the answers. He sees Marks as a protest theologian, following in the long tradition of Job, parts of the Psalms and Ecclesiastes. Marks is the prophet whose anger and bitterness at God cannot help but find expression. And has its place.

Though Purple State of Mind is balanced by the polarity of its opinions, the film may find a wider religious than skeptical audience. And some of them may find Detweiler's stance untenable. Detweiler is not interested in winning the argument. Ultimately Detweiler knows he starts, not finishes the conversation. Fundamentalists may find Detweiler's faith even more dangerous than Marks's disbelief. Some might tar Detweiler with a liberal brush, even if he would refute the claim, just as he does all labels. Detweiler's views on homosexuality, political activism and even abortion, welcome as they might be to some (this author included), may not sit well with others. Marks even admits that it is difficult to position himself as the non-believer when Detweiler admits he has wrestled with so much doubt and difficulty embracing his own people.

Detweiler and Marks were roommates at Davidson

Detweiler and Marks have been presenting their film everywhere from tiny coffee houses to churches to packed convention centers (click here for their schedule). Heady Q&A sessions inevitably follow. What is perhaps most surprising is that a film this deep, this raw and this emotionally charged could also be this funny. Detweiler goes so far as to call Purple State a comedy—and based on the boisterous response, audiences seem to agree.

The film acts as a cinematic bridge to plug the cultural gap across which the battle lines of left vs. right, gay vs. straight, atheist vs. believer have been drawn. It is a sincere, often messy plea to push beyond our respective political enclaves and wade into the middle ground where most people reside.

Purple State of Mind is about as honest a dialogue on the things that both divide and unite us as you will find. With authenticity that doesn't pull punches and intimacy that never loses sight of the big picture, the film recognizes that the conversation, not the conversion, is the commonality.

The film, which Detweiler sees as "a prayer, a hope," doesn't end with answers, simple or otherwise. It is an ongoing conversation between two old friends that spills out into theaters, living rooms and sanctuaries. The principles cannot reconcile their differences, but they, and by extension we, must be all right with that. We must get beyond our differences to the important work of listening and truly caring for each other.

"It can't be about arguing," Detweiler says. "When we argue, even if we win, we lose."