Ben Barnes is playing the part of a storybook hero he's loved since he was a kid—but now he's got to figure out how to deal with being a teen idol himself.
by Mark Moring |May 13, 2008

When Ben Barnes saw the final cut of Prince Caspian for the first time in New York two weeks ago, he did what many people do after watching a 2½-hour movie … and drinking a large soda. He headed for the men's room.

Nothing unusual there. What was unique, though, were the throngs of teenage girls waiting outside the theater, practically ambushing the handsome Barnes—who plays Caspian's title character—and co-star William Moseley in their short trip to the "loo," as they call it back home in England.

Barnes, in his first major feature, and Moseley—who plays Peter Pevensie and was already a bit of a teen idol back home in England—politely pushed their way through the gawking girls and made it safely into the bathroom to take care of business.

Meeting with members of the media the next morning, Barnes was still snickering about the previous evening's events.

"Yeah," he chuckled, "I had to break the shocking news to the fans: Even Prince Caspian gotta pee."

If Barnes, 26, doesn't make it as a movie star, he could consider a second career as a stand-up comic. In two interviews with CT Movies (a couple months ago on the phone, and again recently in New York), he had his questioners in stitches on several occasions—especially when talking about his sudden fame, which is about to explode with Caspian's worldwide release this Friday.

Barnes' face is the dominant image on the movie poster, plastered everywhere these days. You've probably seen him on any of the countless TV spots in recent weeks. And, of course, he'll soon be in a toy store near you as a bona fide action figure—a concept that has Barnes shaking his head. 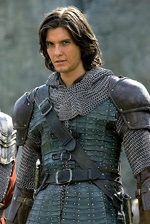