There is a lot of talk these days about change. But change doesn't happen just by talking about it. It happens when people join hands and mobilize to actually get things done. There are inspiring tales of this sort of change happening every day, across the world, but how many of them do we ever actually hear about? Thank goodness for unassuming little documentaries like Pray the Devil Back to Hell, which tell us not only that change can happen in the world, but how it can be done.

Produced by Abigail Disney and directed by Gini Reticker, Pray the Devil Back to Hell recently won the Best Documentary Award at the Heartland Film Festival. It's a quick, 72-minute glimpse inside the nation of Liberia—a country with American roots (it was a colony settled by ex-slaves from America) that is all but invisible to the average American today. It's a country that has a complicated 160-year history and has suffered through two civil wars over the last 20 years. For most movie audiences, Liberia is an exotic place they've heard mentioned on the occasional NPR brief, but otherwise know nothing about. Pray the Devil Back to Hell goes some way toward changing this.

For such a short film, Pray manages to provide a relatively comprehensible lesson in recent Liberian history. The narration by Leymah Gbowee is well written and concise, telling us of the troubles that have raged in the country at the hands of president Charles Taylor (later convicted of war crimes) and the bloody warlords who control the countryside and seek to overthrow and take over the government. In 2003, a large coalition of Liberian women banded together to put their collective foot down against the violence, staging sit-ins and human barricades to force the dueling ... 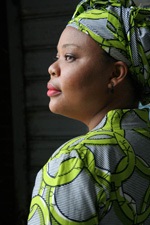