Good luck pinning Danny Boyle down. The director of such wildly divergent films as Trainspotting, 28 Days Later, Millions and Sunshine chews through genres the way some actors chew through scenery. Yet in each, Boyle leaves his utterly distinctive signature. It is a hybridization containing equal measures darkness and light. His fables often depict relentless despair that gives way to something beautiful and transcendent just when the viewer cannot take a moment's more gloom. No matter how wretched Boyle's situations, hope is, at all times, just a frame away.

Slumdog Millionaire is something new yet again. While it certainly contains passages of harrowing bleakness, Boyle does not wait until the very end to parcel out hope. It flits into view throughout, buoyant and luminous. It threads its way though the narrative, never letting the viewer forget that it is there. And when it decides to show itself entire, its revelation can only be encompassed in the jubilant, phantasmagoric expression that is Bollywood. 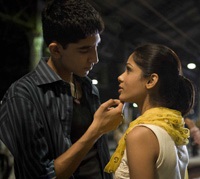 Slumdog Millionaire opens with a pair of policemen brutally interrogating a young man, using torture to coax him to talk. So far it's not working. Convinced the boy in their custody is a criminal, one of the men asks the other how a kid from the slums can make 20 million rupees (about $400,000 U.S.) on a game show without cheating. "I knew the answers," the young man responds wearily. With those words, Slumdog Millionaire bounces back in time, cleverly showing us exactly how Jamal Malik, an 18-year-old orphan from the slums of Mumbai, came to find himself on the cusp of a fortune.

Jamal (played by Dev Patel as a young man and, as with the other leads, two other actors at various stages of childhood) is a product of squalor, of homes built on and out of the refuse discarded from the rest of society. When Jamal's mother is murdered during an anti-Muslim raid, he and older brother Salim (Madhur Mittal) are forced to fend for themselves.

They survive on hook, crook and sheer resourcefulness, taking in another orphan teen girl, Latika (Freida Pinto), with whom Jamal is instantly smitten. Eventually they are picked up by a Fagin-esque hustler who runs a sort of criminal orphanage. Each day the lost boys and girls beg for money in the city to bring back to their "benefactor." When Salim discovers the danger they are in, he and Jamal flee, leaving Latika behind.

As the years pass, Jamal takes odd jobs to survive, some of them honest, some of them not. Salim turns to increasingly violent crime to fill his belly. The brothers are a study in contrasts—one does what he needs to survive yet stubbornly holds onto his soul, while the other gladly trades his soul in, ecstatic at the street price it brings.

Desperate to reconnect with Latika, Jamal insists they return to Mumbai and begin searching for her. Though the brothers eventually find her in the most hopeless of situations, one in which she is bought and sold like so much chattel, Jamal never loses hope that they will one day be together again.

Throughout life's challenges, Jamal is astute and observant, soaking in his surroundings. He is able to instinctively draw from this deep reservoir when it matters most—appearing on the garish game show, "Who Wants to be a Millionaire?" Each question posed to him correlates to experiences in his past, though both the show's host (Anil Kapoor) and the police officer (Irfan Khan) who must decide his fate cannot comprehend how such knowledge is possible. Nor can they, or the galvanized nation which watches each night, figure out why a young man who seems to care nothing about the prize money is so intent on winning it all.

Slumdog Millionaire flies on the wings of an effervescent energy, bursts with dazzling color, and is set to the pulse-pounding music of Indian superstar A.R. Rahman. Boyle has always been at the forefront of the digital medium, and with Slumdog Millionaire, he shows why he deserves to be at the pinnacle of those courageous artists who dare greatly and succeed beyond even their wildest dreams.

Reminding me more than once of the brilliant Baz Luhrmann (Moulin Rouge), Boyle here sets groundbreaking, hyper-stylized, breathtakingly beautiful images amidst heartbreaking squalor. Boyle's camera lists from side to side throughout the film, images askew and angles off kilter. Many shots are in close-up—never invasive, always intimate. The camera moves as if it is attached to the body of one of the shantytown's children—running, jumping and soaring through the air at breakneck speeds.

Slumdog Millionaire reveals India, both old and new, a place of filth and waste as well as rebirth and resistance. We watch as the nation embraces the 21st century, rising from the ashes of poverty for some, but at the crushing cultural price of a distinctly Western frivolity, hollowness and nihilism. Boyle does not alter the anthropological details of his location, so much as he injects his unique fantasy directly into the preexisting mix just to see how it will be remade in the image of the new setting.

Slumdog Millionaire is, quite simply, one of the best films of 2008. It is a fable, and if you try to apply the strict rules of reality, you will come away disappointed. Instead, surrender to the contrived magic of a film that dares to use dialogue like this …

"Come away with me."

… with not only a straight face, but an unabashed, unrepentant, irrepressible idealism. Slumdog Millionaire pulsates with life and should be celebrated loudly and lustfully. You won't find a better romantic crowd-pleaser all year. Although there is sadness and tragedy in a film that examines poverty with a Dickensian forensic lens, there is also something greater—humanity and humor, dignity and majesty that never ceases to shine through.

Boyle infuses all of his films with a haunting spirituality, seen as plainly and overtly in Millions as in his elegant zombie movie, 28 Days Later. Each of his stories operates as vehicles to steer us closer to a worldview fired by shameless optimism.

I once had the chance to speak with Boyle about the spirituality that resonates within all of his films. I asked him about the "Hollywood moments" that seem to rescue his films from dread.

"I'm an optimistic person by nature," he said. "I'm a sucker for 'up' endings, for Hollywood endings. I need hope."

He acknowledged that his films had a weighty spiritual side, though he dismissed calling them "Christian." Still, he admitted that, "There is something out there bigger, wider than we can accommodate at the moment." (See also CT Movies' interview with Boyle when Millions released in 2005.)

Although Jamal is a Muslim, it is his faith in love itself—not God—that sees him through the rough times. Time and again, Jamal combines an inherent determination to succeed with a fierce devotion to the transforming, surmounting power of love. Even at the darkest of times, Jamal's inspirational faith in love is both an ideal and a specific tether to Latika. Everything to which Jamal sets his heart and life is for that purpose alone.

Slumdog Millionaire is rated R for some violence, disturbing images and language. The themes are graphic (poverty, torture, sexual abuse, prostitution, robbery, murder, etc.), but are rarely presented graphically. The language is moderate, and the only nudity is that of a young child. Older, discerning teenagers could find the film illuminating. Slumdog Millionaire is mostly in English, though there are large sections in Hindi, with English subtitles.