The German film After the Truth, exploring a fictional trial of Nazi doctor Josef Mengele, forces all of us to ask ourselves if we're capable of the same sort of evil.
by Mike HertensteinOctober 15, 2008

After the Truth is the imaginary tale of Dr. Josef Mengele's return to a newly-united nation which resents having their post-Cold War celebration spoiled by a Nazi Party pooper.

Mengele was the "Angel of Death of Auschwitz," the furthest extreme in Nazi betrayal of sacred trust in the medical profession and Western ethics. His horrific medical experiments on concentration camp inmates afterward represented the lowest a human being—humanity itself—can sink.

The real Mengele escaped to South America, where he dodged responsibility until drowning in 1979 at age 68. Since Mengele died without answering to human judge, this film drafts on the story of another fugitive Nazi, Adolf Eichmann. The accountant for the Final Solution was kidnapped by Israeli agents in 1960 and brought to Jerusalem to be tried, convicted and hanged. Eichmann sat in the bullet-proof glass box that Mengele occupies here. The doctor comes home willingly, to resolve things—to tell, he says, "the truth"—his truth: that he's not such a bad guy, that he's been made to take the rap for a nation, if not a species.

Other truths are in play. The truth of the nation, at pains to distance itself from that Germany. The truth of Mengele's attorney, Peter Rohm, who can't finish his biography of the doctor. The historical truth of Auschwitz isn't much in question: "what really happened" is freely admitted by Mengele, to the outrage of neo and old Nazis. Nor does the film puzzle over legal truth, the legitimacy of war crimes trials, controversial even at Nuremberg, dismissed by some as "victor's justice." That would have been an obvious entré e into conversation about truth itself, a concept lately as quaint as certain provisions of the Geneva ...

Join in on Facebook
Tags:
None
Posted:
October 15, 2008
More From: by Mike Hertenstein 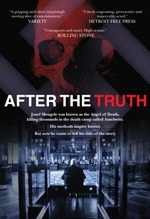