Billy Graham has appeared in many movies over the years, most of them produced by World Wide Pictures, the movie studio that he founded through his evangelistic ministry in the 1950s. But apart from a handful of parodies, no actor has ever played him before, and certainly no film has tried to show what kind of person he was prior to becoming the internationally recognized preacher that he is today. So there was lots of fertile ground for Billy: The Early Years, the first major Graham biopic, to explore. Too bad, then, that the film does such a poor job of bringing his story to life.

Directed by Robby Benson (an actor-turned-director best known for voicing the furry prince in Disney's Beauty and the Beast) from a script by William Paul McKay (who produced the miraculous-survival-of-Israel documentary series Against All Odds) and Jana Lyn Rutledge (whose résumé includes the Canadian Christian kids' show Circle Square), the film does have one brilliant idea, but squanders its potential.

The film takes its cue from Amadeus, and tells the story of Graham's life through the eyes of Charles Templeton (Martin Landau), an old, hospitalized man who worked with Graham in the early days but then lost his faith. Now, decades after abandoning the ministry, Templeton is on his deathbed and giving an interview to a reporter (Jennifer O'Neill) who wants to know what working with Graham was like. 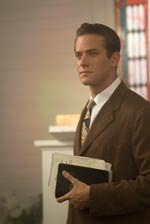