Vin Diesel and Paul Walker reprise their roles as thief and cop, but while this latest installment in the franchise is certainly fast and furious, it's also vulgar, noisy, and dumb.
Russ BreimeierApril 3, 2009
Our Rating

Though Fast & Furious is the fourth installment in the franchise, it's really the first true sequel to 2001's The Fast and the Furious since it reunites the principal cast members. 2 Fast 2 Furious (2003) was little more than the next car-centric case for hotshot cop Brian O'Conner (Paul Walker), while The Fast and the Furious: Tokyo Drift (2006) offered nothing in common with its predecessors beyond fast cars and a cameo in the final scene by racer/thief Dominic Toretto (Vin Diesel). But then F&F begins with a heist involving a principal character from Tokyo Drift who died in that film, making this either a prequel to the third movie or else a sequel that begins with a flashback.

Call it what you want, but Fast & Furious lacks more than the the's in its title. Things just aren't nearly as much fun this time, illustrating the difference between a guilty pleasure B-movie like the original and the embarrassing junk typified with a direct-to-video release.

Recall that O'Conner let Toretto escape before the cops could nab him at the end of the first film. Since then, Toretto has been operating as a fugitive with his girlfriend Letty (Michelle Rodriguez) outside of the States. F&F begins in the Dominican Republic with a tanker truck heist as exhilarating—and improbable—as the high-speed car heist that opened the first movie.

Before long, Toretto is back in America to grieve the loss of someone close to him, apparently murdered by the henchman of a shadowy drug lord. Turns out that O'Conner is after the same drug lord, and wouldn't you know it, the two vow to bring him down. Though they start off as rivals—the drug lord just happens to be looking for the fastest drivers around—you can bet they'll end up cooperating, ...

Join in on Facebook
Tags:
None
Posted:
April 3, 2009
More From:
Russ Breimeier 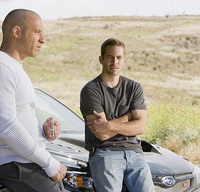