Hannah Montana star Miley Cyrus, a Christian, embraces the idea of being a role model while also admitting she's flawed.
By Carolyn Arends|April 8, 2009

Miley Cyrus is in many ways a typical 16-year-old, a contradictory, evolving mix of poised young woman and goofy kid. But where most teens only have to navigate the turbulent waters of self-discovery in front of their classmates and teachers, Cyrus is growing up before millions of watchful eyes.

Thanks to the astronomical success of her Disney Channel sitcom Hannah Montana, Miley has become the most famous teenager in the world. Her album sales are multi-platinum, ticket grosses for her 2007 concert tour earned $55.2 million, and her new feature film Hannah Montana: The Movie (opening Friday) is expected to reach similarly stratospheric box office numbers. She is the face and voice of a franchise worth an estimated $1 billion; there is Easter chocolate bearing her likeness at my local Walmart.  Now that's famous.

As a Disney icon, Cyrus is expected to be a paragon of wholesome virtue; as a professing Christian—"He died for our sins, that's how awesome he is," Miley says in this YouTube video (fast forward to 6:12)—she takes her influence over her young audience seriously.  But under the spotlight's relentless gaze she has not been able to completely avoid controversy.  Fans and critics alike questioned the appropriateness of a scantily clad Vanity Fair photo shoot in 2008—which also featured her co-star dad, country singer Billy Ray Cyrus.

The mothers of Miley's tween-aged followers worry that the young actress is in over her head with older boyfriend Justin Gaston, a 20-year-old singer and underwear model. And a recent photo of Miley and friends jokingly pulling their eyes into slits provoked accusations of racism. 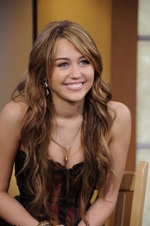